Why I Am Antiwar

By @mdvet4
Every week a special guest shares an emotional experience that made them question war or value peace. This could be a moment in their life, a piece of art, or a gripping headline. Guests will include veterans, peace activists, and every day people who a want to share their story.

Introducing "Why I Am Antiwar" 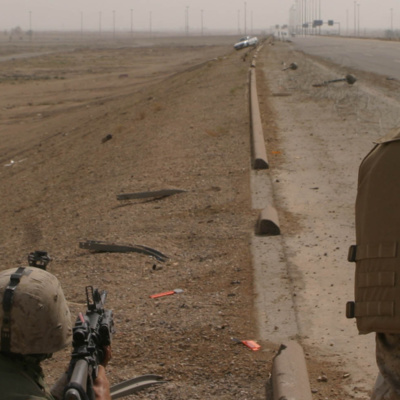 Episode 3 The Car
The car was no IED. It was a Father and two sons. They were not combatants; they simply did not recognize that the highway they were driving down had become a combat zone. I never saw inside the car but one child was killed. The father was shot through the gut, and the living son in the arm. I can barely imagine the fear they must’ve experienced suddenly coming under a hail of machine gun fire, then being trapped in that car while we fired grenades at them. Eventually we got a corpsman and an interpreter to provide aid to them and they were taken to the hospital. I have no idea if the family were ever compensated the standard $2500 for our slaughter of their child, the destruction of their car, or their wounds. I do know they must carry the scars and pain of that event every day 15 years later, assuming they have survived the last 15 years of conflict. For years I blamed them for their carelessness, then I blamed the Marine corps for its carelessness, and now I know the only people to blame are those who started this war in the first place. These kinds of moments are everyday occurrences in war. They are predictable outcomes of turning someone’s town into a war zone. This happens in all wars, no matter how well intended or executed. There are no “good” wars. If I were religious, I would deeply fear an unforgiving god. I carry the guilt of taking a life, making a father bury his son, and nearly killing him because I was scared and in the wrong place. If there is a god, I hope I can be forgiven. This podcast is my penance and I hope all of you listening will share it and tell others it is time to end these wars and give peace to this family I destroyed but never met.
09:24
January 10, 2021 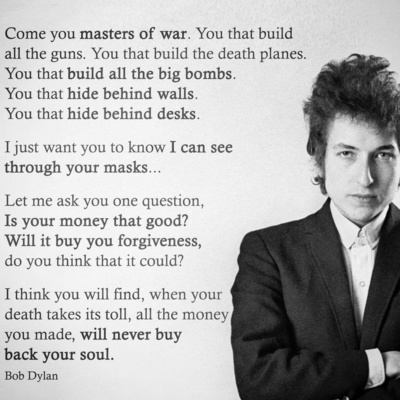 Episode 2 Bob Dylan "Masters of War"
I had just turned 16, and my father had planned for years to take me on a cross-country road trip when I could drive. So we set out on an 8000-mile, 25-day trip with 10 CDs in the car. Three of them were Bob Dylan. Two were the best of and the third was “freewheeling.” Musically, I was familiar with Hendrix, the Stones, and the Animals from my father’s record collection, but I hadn’t yet listened to Bob Dylan. At first it grated on me. It was 2000, and I was a teenager and growing at least somewhat interested in the angry music that was popular at the time, like Slipknot. At first, Bob Dylan didn’t appeal to me, but then “masters of war” came on. From the first notes, the song seethed with anger in a way I had never experienced before. Bob Dylan himself said the song startled him. Often, antiwar art can be misinterpreted by its audience. As a young man, I was completely blind to the messages in movies I loved like “Full Metal Jacket” and “Platoon.” But as a critic said, it was “the bluntest condemnation in Dylan's songbook, a torrent of plain speaking pitched at a level that even the objects of its bile might understand it” I was particularly struck by the line “..for threatening my baby, unborn and unnamed..” His son Jakob was familiar to me for his own hit “one headlight” with his band The Wallflowers, and something about the connection between Bob Dylan and his concern for his unborn child struck me particularly clearly. This was one of the first times I Imagined that our military and its wars could affect us here at home, and it was one of the first moments my mind opened to the idea that one could be strong, and even angry, yet prefer peace to violence. It took me many more years and countless revisitations of this song, but each time I find it more rewarding. That song was recorded in 1963, and nearly 60 years later the song is every bit as relevant today. You’ve thrown the worst fear That can ever be hurled We are in the midst of a multibillion dollar update to our nuclear arsenal, while tensions with nuclear armed powers escalate and arms treaties expire. Even more now than in the 1960s, war seems sanitized and our weapons have lost their stigma of fear, becoming normalized. When our soldiers die, they are boxed up, draped in a flag, and sent home with honors/ You fasten the triggers For the others to fire Then you set back and watch When the death count gets higher You hide in your mansion As young people’s blood Flows out of their bodies And is buried in the mud The truth is that even if there are fewer “unknown soldiers’ buried in the mud,’ death is every bit as ghastly. And even if it is sanitized for the cameras, the hundreds of thousands of civilians killed in these wars still suffer and are buried in shallow graves. We must all see through the mask again and refuse to accept the sanitized vision of modern warfare.
06:28
January 3, 2021 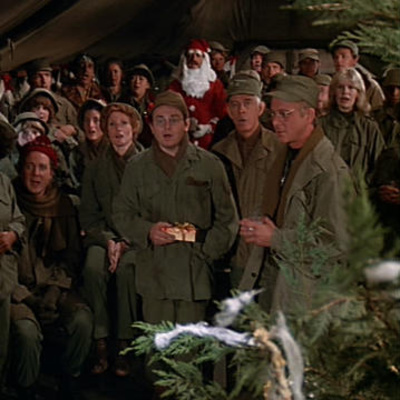 Episode 1 Mash Dear Sis
Welcome to Why I am antiwar, @antiwarpodcast with your host @mdvet4 This the podcast that shares experiences and stories that lead us to question war or see the value of peace. here is one of those stories As a child I loved all things military in part because I knew My father is a Vietnam veteran. He  was raised catholic and was an altar boy. He never raised us in a religion. It was not until middle school I became aware that our families atheism or agnosticism was unusual. I asked my father why we never went to church and he explained rather cryptically that immediately after returning from Vietnam he went to Mass and a fight broke out in the parking lot as people were fighting to leave. I surmised that religion ceased to have the effect it once did for him. I think on some level I knew there was more to the story and it must’ve been more related to his experiences in vietnam than he let on. Later he told me decided it was best to let his children choose their religion (or not) rather than be raised into one. The fact he was a veteran and a DOD civilian employee seemed to foster my interest in all things military and this included every war movie and TV show I could find. I particularly enjoyed M.A.S.H. It was in syndication for most of my childhood and over the course of several years I watched every episode more than once. 8th or 9th grade I struggled with creating a sense of self identity and militarism became a part of of my identity but I also “tried out” catholicism as an identity, so I found the role of Father Mulcahy in MASH to be intriguing. In spite of the very obvious antiwar messages of many of the films and tv shows, Antiwar art often has a reverse effect. The military story lines and likable characters initially only enhanced my affinity towards the military. Unfortunately These stories do not serve their purpose until the audience is ready read hear them. However the Dear sis episode of Mash was an exception that seemed to resonate with me. Most of the story centers around the chaplains search for meaning and purpose in the midst of the war. It comes to a close with a Christmas party and the key characters show their appreciation of the Catholic Chaplain by singing a round of “dona nobis pacem” a latin prayer for peace. I had seen other episodes where the characters want the war to end, or to go home. But there was something poignant in their dedication of prayer to the chaplain and something beautiful about the singing that struck me. For once, it sank in that these people truly wanted peace. I found it odd and at the time just dismissed it as the peacenik attitude of the cast. But still I held on to the moment. It was one of the first time I really considered and realized that those sent to war wish for peace. The tune of the song stuck with me and I never forgot it. It took many more years for me to change my beliefs but that one scene was always somewhere in the back of my mind. Though antiwar art does not always immediately strike the root, I think this scene planted the first seed for me to become antiwar. Hopefully it will for you or someone you share this with too. That was another story from “why I am antiwar” be sure to follow us @antiwarpodcast and follow me @mdvet4. Go to antiwarpodcast.com to find all of our podcasts and show notes For this episode. Bonus materials, such as a full interview and discussion with our guest about this episode are available for supporting listeners.
05:49
December 27, 2020

Introducing "Why I Am Antiwar"
Welcome to "Why I Am Antiwar," with your host @mdvet4 This the podcast where guest will share experiences and stories that lead us to question war or see the value of peace. It could be a moment they experienced, the loss of a friend or loved one, the trials suffered by families in war, a book, movie, tv show, painting, or song. We will share that experience and explore how it affected us emotionally. We will keep these podcasts short and share them far and wide so that we can win the hearts so that minds will follow. We are hosted at anchor.fm/antiwarpodcast and will soon be available on your favorite podcatcher. Our website antiwarpodcast.com will be up and running soon. you can also find us on youtube “why I am antiwar” or twitter & Instagram @antiwarpodcast. Expect my first full episodes to be available this holiday season. If you would like to share your story please contact us through twitter, the or at “antiwarpodcast@gmail.com" Please subscribe and share this podcast and use the hashtag #whyIamantiwar to spread this message.
01:34
November 30, 2020