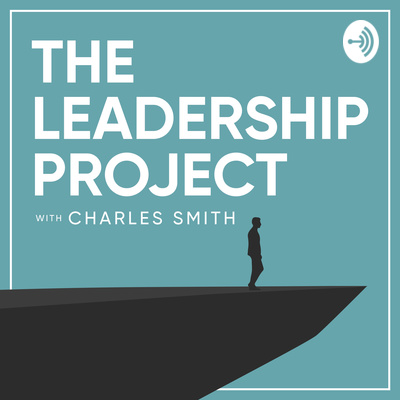 The Leadership Project With Charles Smith

By Charles W Smith Jr
A podcast designed to help Christians understand and embrace God's call to take initiative for the glory of God and the good of others.

The podcast is hosted by Charles Smith who currently serves as Vice President for Institutional Relations and Associate Professor of Christian Leadership at Midwestern Seminary and Spurgeon College in Kansas City, Missouri (www.mbts.edu). In addition to his roles at Midwestern, Smith also serves as the General Editor at For The Church (www.ftc.co).
Website

Derwin Gray: Chasing Shadows, The Naked Preacher, and Racial Reconciliation
In this episode, Charles sits down with Dr. Derwin Gray who shares his story and passion to see the Church embrace a biblical view of racial reconciliation. Dr. Gray is a former NFL safety, pastor of Transformation Church, and author of a number of books, including The Good Life.
33:35
July 6, 2020

Andrew Peterson: The Intersection of Creativity and Leadership
In this episode, Charles sits down with singer, songwriter, and author Andrew Peterson to discus his new book, Adorning The Dark.  Learn more about the book and Andrew's other work at: https://www.andrew-peterson.com/home
34:42
June 8, 2020

Russell Moore: Why Integrity Matters More Than You Think
Charles sits down with Dr. Russell Moore to discuss why integrity is at the heart of transformative leadership.   Other topics include:  Patience & Loneliness Not knowing what God is doing & who we're influencing Giving a godly rebuke
38:30
May 18, 2020

Darrin Patrick: Lessons Learned In Losing My Church
In this episode, Charles sits down with the late Darrin Patrick, author, teacher, and founding pastor of The Journey Church in St. Louis to discuss lessons he's learned being removed from the church he planted.  Listen to a similar sermon here: https://www.youtube.com/watch?v=a8xORUC4WZQ Visit the Pastor's Collective here: https://www.pastorscollective.com/about
34:01
May 4, 2020

Matt Carter: Catching Birds & Leading Beyond Your Weakness
In this episode, Charles sits down with Matt Carter, Pastor of Preaching at The Austin Stone Community Church to challenge John Maxwell's "law of the lid". Specifically, Carter challenges the notion that individuals cannot lead beyond their weakness, sharing three lessons he learned about leading from weakness in his 20 years at The Austin Stone.  He wrote about this over at For The Church and you can buy his book, Steal Away Home, here.
38:11
April 20, 2020

Dave Wright: 6 Questions Every Team Must Answer
In this episode, Charles sits down with Dave Wright, Director of Communications and Brand Strategy at Midwestern Seminary and Spurgeon College, to discuss Patrick Lencioni's book "The Advantage". During the podcast Charles and Dave discuss the importance of organizational health, why leaders often don't pursue it, and how they can achieve it by answering six simple questions. Buy "The Advantage" here: https://www.amazon.com/Advantage-Organizational-Health-Everything-Business/dp/0470941529/ref=tmm_hrd_swatch_0?_encoding=UTF8&qid=&sr=
56:26
April 3, 2020

Kevin Peck: Developing and Deploying Leaders In The Church
In this episode, Charles sits down with Kevin Peck, Lead Pastor of Austin Stone Community Church, to discuss why and how local churches can strengthen their leadership development.  You can buy a copy of Kevin and Eric's book, Designed To Lead, here:
37:50
March 30, 2020

Ronnie Floyd: 5 Principles For Leading Through Crisis
In this episode, Charles sits down with Dr. Ronnie Floyd to discuss five principles for leading through crisis.  Dr. Floyd was elected as president and CEO of the Executive Committee of the Southern Baptist Convention on April 2, 2019. Floyd’s proudest accomplishments stem from his personal life. He and his wife, Jeana, have been married for 42 years. They have two sons, Josh and Nick. Josh is married to Kate, and they have three sons, Peyton, Parker, and Jack. Nick is married to Meredith, and they have a son, Beckham, and three daughters, Reese, Norah and Maya Faith. Josh is the head football coach at Hewitt-Trussville High School in Trussville, Alabama. Nick is senior pastor of Cross Church in Northwest Arkansas. Floyd has deep experience in Southern Baptist leadership, having served two terms as SBC president (2014–2015 and 2015–2016), as chairman of the Great Commission Task Force of the Southern Baptist Convention (2009–2010), and on the SBC Executive Committee (1988–1998). As a member of the Executive Committee, Floyd was on the Committee’s presidential search committee (1991–1992), the Program and Structure Study Committee of the SBC (1993-1995), and was chairman of the board (1995–1997). During this time, he was also elected as president of the SBC Pastors’ Conference (1997). He also served as general editor of LifeWay Christian Resources’ Bible Studies for Life curriculum (2013–2017); chief mobilization strategist with the North American Mission Board (2012–2015); and was on the board of trustees, GuideStone Financial Resources (2001–2009). Floyd was pastor of five churches over a span of 43 years, the last 32 of which were as Senior Pastor of Cross Church, a multi-campus church in Northwest Arkansas (1986–2019). His experience, wisdom, and passion for God make him a powerful proclaimer of God’s Word and inspiring leader. He has spoken at numerous SBC Pastors’ Conferences, state evangelism conferences, and state conventions and has pledged to lead the Executive Committee “with a pastor’s heart.”
31:09
March 20, 2020

Brian Key: The Masks Leaders Wear
In this episode, Charles sits down with Brian Key to share his story and the difference authenticity makes in leadership.
33:14
March 5, 2020