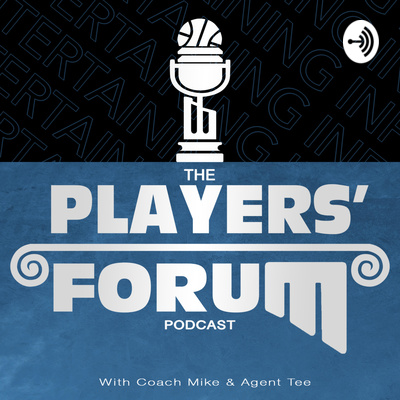 The Players' Forum is a video podcast miniseries airing during the summer and fall months as a source for informative basketball talk about mentor-ship, education and community. Hosted by the co-founders of Great Gain Athletics Inc, retired international basketball player, coach and mentor, Coach Mike and his co-host, sports agent and producer, Agent Tee. Together they will bring you memorable stories, humor and life lessons. The ball is always in your court, right here on The Players' Forum.

E10 : Coach Mike Memoirs - How College Basketball Exposed My Lack Of Team Experience
E10 : Coach Mike Memoirs - How College Basketball Exposed My Lack Of Team Experience. In this episode Coach Mike talks about how his lack of experience during his college years affected his transition into his pro career. It was an unexpected shift his journey, causing him to miss out on job opportunities and ultimately labeled him as a hot head on the court. Nonetheless, his work ethic, tenacity and love for game became the driving force for an 8 year playing career. His advice to players with similar experiences. “Be vulnerable and open to the people who genuinely have your best interest at heart. This podcast series is brought to you by the creative producers at The  Soultry Group. Digital media production for the arts and souls.     Please make sure to subscribe to our channel and hit the notification  bell so you can help us spread the word and hopefully bring value to the  digital world.     JOIN US ON OUR SOCIAL CHANNELS  IG: https://www.instagram.com/great_gain_athletics/  IG: https://www.instagram.com/the_soultry_group/ I G: https://www.instagram.com/teetothe/       #theplayersforumpodcast #greatgainathleticsinc #ggafam #sportsmentoring #teetothelifestyle #soultrytv #thesoultrygroup #digitalmediaproduction
49:54
December 12, 2020

EPISODE 9: LIFE AFTER BASKETBALL - RETIRED PRO BALLER & Omega Psi Phi FRATERNITY BROTHER, RYAN HOLMES SR.
Welcome to Episode 9 of The Players' Forum In our mini series entitled  LIFE AFTER BASKETBALL where we catch up with pro basketball players who  played internationally and see where life has taken them after  basketball. In this episode we talk to retired pro baller and Omega Psi  Phi frat brother, Ryan Holmes Sr. about his Chicago upbringing, his  fraternity life, his basketball career and his organization One Thumbs  Up in memory of his sister.      #ryanholmessr #omegapsiphi #onethumbsup
47:45
October 29, 2020

EPISODE 7: Life After Basketball Mini Series: How to Prepare For The Transition In The Next Phase Of Your Basketball Career.
Welcome to The Players' Forum Podcast - In this episode we talk about ways you can begin to prepare yourself for life after basketball. Especially during this time when jobs and opportunities seem scarce for basketball players who are aspiring professionals and seasoned vets returning to jobs with huge pay cuts. It's contract season, but now with the new norm, it's also the season for players to start thinking about what direction they want their career to move in. Coach Mike and Agent Tee share some insight on where to start that has helped Coach Mike transition and continues to help him position himself for success. ADVICE SHARE IN THIS EPISODES 1. Explore and research your interests. Educate yourself in the field. 2. Work on your growth mindset and building your circle of influence. 3. Volunteer your time to explore different industries and gain experience. Internships 4. Your player profile is your resume and basketball experience can also translates as professional work experience. 5. Be fearless, don't be afraid to ask for help. Ask for letter of recommendations, seek mentors, and don't limit yourself. You are more than an athlete.
23:25
September 27, 2020

EPISODE 6: The Impact of Youth Basketball Programs Featuring LA Blue Chip Founder, Alex Stephens
Welcome to The Players' Forum Podcast -  In this episode we talk about the positive and negative affects of youth basketball featuring coach, mentor, and founder of LA BLUE CHIP YOUTH BASKETBALL PROGRAM, Alex Stephens. From Coach Alex shares his insight from 20 plus years of coaching experience what it's like running a youth program and the roles and impact parents, coaches and trainers play in the development and wellness of youth in sports. Coach Mike also breaks down what we all can do as coaches, parents and trainers to ensure youth are put in the best position to succeed on the court and beyond the game. ABOUT COACH ALEX STEPHENS Coach Alex's motivation is a product of his experiences, hard work, and dedication, which have all fueled the drive and passion Alex has for coaching. Coach Alex Stephens has over 20 years of coaching experience, and has played and coached on almost every level. As founder of Blue Chip, Coach Alex's goal is to simply use basketball  as a tool and vehicle to make a positive effect and give each player an  opportunity for a higher education, both on and off the court, by  creating high quality character student athletes. [ 9/19/20 - https://www.labluechip.org/coaches]
01:00:14
September 20, 2020

EPISODE 5: LISTEN TO THIS BEFORE YOU SIGN A CONTRACT!! - International Basketball Job Scams
Welcome to The Players' Forum Podcast -  In this episode we share our personal experiences with international basketball scams, the most common and trendiest ways scammers scam players and our top tips on how to vet out legitimate opportunities so you can avoid wasting your time and money.
26:23
September 13, 2020

EPISODE 4: Eric Perry, Cal Poly Director Of Basketball Operations on Work Ethic, Training & Self Motivation
Welcome to Episode 4 of The Players' Forum. NBA Player Development Coach and now Director of Basketball Operations for Cal Poly, San Luis Obispo, Eric Perry joins The Players' Forum to share his journey of taking the road less traveled. Building his network of influence, his resume and ultimately earning the respect of NBA legends on and off the court, Eric gives us insight on being a professional, developing a work ethic, training at the pro level and staying motivated to reach your goals as an athlete and business professional.  There's no question It's about who you know but, it's also about how prepared you are when opportunity presents itself.  Eric Perry's Professional Background - Bringing coaching and player development  experience from every level between the NBA and high school, Eric Perry  is in his first season as the Cal Poly men’s basketball program’s  director of operations. “We’re very happy to have completed our coaching staff with Eric.  He’s someone who understands the daily importance of the tasks that it  takes to run a collegiate basketball program as he was a former head  coach himself at his alma mater, Crossroads College in Minnesota,” Cal  Poly head coach John Smith said. “We’re fortunate to have him on our  staff in such a vital role. He’s the engine that keeps us moving as a  staff and program from behind the scenes.” Perry arrives at Cal Poly having last served last served as a player  development coach and operations manager with Chris Johnson Hoops – a  private training firm. In his capacity, Perry assisted with the  offseason training development of NBA players such as Jimmy Butler,  Dwyane Wade, Rajon Rondo, Jaylen Brown, Tony Snell and Joakim Noah,  among others. Since completing his playing career, Perry has enjoyed coaching stops  at every level, including AAU with one of the strongest clubs on the  West Coast, the Compton Magic. He has also coached at Crossroads College  (Minn.), Riverland Community College (Minn.) and Norco (Calif.) HS.  Additionally, Perry has coached and trained players in China, Thailand,  Cambodia, Hong Kong, Indonesia and Malaysia. “Eric’s ability to seamlessly handle the administrative and operative  aspects of our program are skills he’s flourished with at his previous  positions,” Smith added. “He also possesses the attributes that we  promote within this program, namely high character, morals and values.” A 2012 graduate of Crossroads College, Perry helped the program to  its first conference championship during his 2011-12 senior season. He  earned his degree in business administration with a minor in sports  management. [ 2020; https://gopoly.com/sports/mens-basketball/roster/coaches/eric-perry/621 ]
31:12
September 06, 2020

EPISODE 3: Expectations Versus Reality Playing Basketball Overseas With Special Guest and International Pro Basketball Player, Nick Evans
In this episode we discuss expectations versus reality when it come to playing basketball overseas.  We talk about what you should expect as a rookie coming in and how you can leverage your opportunities to earn you top dollars playing internationally as a vet.  Our guest, international pro basketball player, Nick Evans shares his story coming in as a rookie; his expectations and experiences as a vet and how he's handling the industry challenges in the wake up Covid-19.
48:09
August 29, 2020

EPISODE 2: Coach Mike’s Memoir – The Day I Met Kobe “Bean” Bryant
Hello World, In this episode, we share a story from Coach Mike's Memoirs. Personal stories from Coach Mike's playing, coaching and mentoring experiences over the years. This stories is about the first time Coach Mike met Kobe "Bean" Bryant back in 2008 at the Lakers vs Bobcats preseason game in Fresno, Ca. Coach Mike worked with the equipment team that day but it was the special moments he had warming up Kobe Bryant that inspired him the most and set the tone for our mission our first official year of running our program, Pro-Club Experience. Follow us on Instagram at @great_gain_athletics for updates and exclusive content. Visit our website at The Players' Forum Podcast Subscribe and hit the notification bell on our YouTube channel for the video version of this podcast at The Players' Forum on YouTube #theplayersforumpodcast #greatgainathleticsinc #ggafam #sportsmentoring
33:46
August 22, 2020

EPISODE 1: Meet The Hosts Of The Players' Forum
Hello World,   In this episode we are giving you a little backstory introduction on who we are as the host of The Players' Forum and what you can expect from the show. We also talk a bit about our organization, Great Gain Athletics Inc and our flagship program, Pro Club Experience.     We wanted to keep it brief and light and just introduce you to our world, stories, experiences and life lessons to not only inspire those who play game, but also those people around them that love and support their journeys and career. Please make sure to subscribe to our channel and hit the notification bell so you can help us spread the word and hopefully bring value to the digital world.     Follow us on Instagram at @great_gain_athletics for updates and exclusive content. Visit our website at The Players' Forum Podcast Subscribe and hit the notification bell on our YouTube channel for the video version of this podcast at The Players' Forum on YouTube #theplayersforumpodcast #greatgainathleticsinc #ggafam #sportsmentoring
21:28
August 15, 2020