By Haley Haley
Jerseys and Heels is the most entertaining and engaging podcast in sports. Hosted by the inspiring and engaging Haley Hunt.
Haley is bringing women into the game and bridging the gap between the fan and the player by giving you VIP access into the lives of these guys (and their women) up close and personal. Through interviews, real life talk and hilarious commentary, she’ll also update you on the latest news and help up your knowledge of sports 101. Stay tuned for the madness.
Listen on Spotify

Martial Arts Mogul Shares Powerful Words about Relationship, Overcoming Life's Hardships and Patriotism
He's a 8th degree black belt, she's a 7th degree black belt and  together they are insanely inspiring. Master Sergio and Master Barbara Vonschmeling, owners of the international chain of ATA schools Victory Martial Arts, share the doorway to success, why everyone should have a mentor, and unlocking the keys to having an incredible relationship. YOU WILL be a better version of yourself after listening... trust me.
40:47
December 10, 2019

Golfing Legend David Leadbetter Tells Why Everyone Should Play Golf
Besides his beautiful British accent, you'll have a lot more reasons WHY you'll enjoy this interview... You may not be a golf fan necessarily, BUT golfing legend David Leadbetter is telling us WHY everyone should play golf, how it helps with life skills, why golf fashion is everything and why he's on the KETO train right now... (don't forget to SUBSCRIBE and leave a comment if you love it!)
25:12
December 03, 2019

So Much More Than An Pro Athletes Wife: Life Behind the Jersey
Tampa, FL .  Three WAGS walk into an apothecary shop... I could introduce them as "wives of former NFL stars Alex Smith and Darren Howard", or I could just tell you my two guests this week bring a fresh perspective on real life behind the jersey, marriage, communication and dealing with life after a career ends (which are ALL things we can relate to).  I am hanging out with Angela Smith and Lyani Powers, from Lyani's beautiful new shop Modern Herbal Apothecary in Tampa. We burn some sage and get rid of all the bad vibes this episode.
39:41
November 19, 2019

Lane Kiffin: The Real Mr. Sonshine Himself
He's probably one of, if not the most prolific faces in College Football, and on this episode of Jerseys and Heels I get to sit down with Lane and ask him some questions you have never heard him answer. He will give you answers you never thought you'd hear, and it is 100% genuine heart. Thank you Lane for your vulnerability and heart! Subscribe to my channel and SHARE this video if you want!
14:44
November 12, 2019

What Men Don't Know About Women Who Love Sports
Welcome to Season 2 of Jerseys and Heels! I have some major surprise in store! This first episode is nothing short of hilarious. Hey guys, did you now we women want to know more about the game, especially us who have "sports craved" men in our lives who we want to connect with. So I thought it'd be hilarious to bring my gorgeous friend Tiffany on the podcast and school her on a few football vocab words. Her answers are as genuine and hilarious as you can imagine. She also shares he story about over coming one of the most insane stories of infidelity that I have ever heard.  You will laugh and be inspired by this episode for sure. Welcome to Season 2, let's get this party started!
19:43
November 05, 2019

The Wrap Up: Season Finale of Jerseys and Heels
Hey guys! This is the last episode of Jerseys and Heels Season 1 and we are going back through and highlighting some of the best moments we've had! I also unveil some of the guests for season 2, so you don't want to miss this episode!   THANK YOU SO MUCH FOR WATCHING, LISTENING, and being the best fan friends in the world!  Until next season (in a few weeks) -  Haley
40:46
July 16, 2019

JNH from the Bahamas: Fashion in Sports & Haley sneaking into the CFB National Championship
This episode: LIVE from our dock in the Abaco Islands with 2 former high school athletes (whoa) and a pro golfer, Haley divulges the deets on her sneaking into the National Championship game in Atlanta last year, and "The Bahama Daddies Club" brings you some of the funniest thoughts you've had in a long time about everything you could imagine in 40 minutes. We are excited you're listening! Enjoy!
36:57
July 02, 2019

From The NFL to the Africa: Jim Corbett Episode 10
A former Cincinnati Bengal, now successful financial advisor who spends half of his year teaching people in Nigeria truth and life, Jim Corbett shares powerful words this episode. What has the people of Nigeria taught you? How do you go from playing in the NFL to being a missionary in Africa? As a clean freak, how do you deal with traveling in Africa? WHAT would you tell our generation today?
27:30
June 25, 2019

Bee Keeper and Big Brother to the Cincinnati Bengals: Eric Ball
Who helps your favorite NFL players transition from college and then out of the NFL into the real life? It takes a really special person to come along side these guys and love them like a “big brother”. Former NFL running back and now Director Of Player Engagement for the Cincinnati Bengals is sharing life and his secret of being a bee keeper. This podcast was recorded in the nosebleed seats of the Bengals Stadium, drizzling rain, and absolutely beautiful.
25:03
June 18, 2019

Pro Soccer Player Toni Pressley talks Vegan Recipes, Playing Soccer Internationally & KINDness
She's a humble bad A$$ and we are so honored to have Orlando Pride pro soccer babe on our episode this week!
19:39
June 04, 2019

Chad “Ocho Cinco” Johnson: The Interesting One: From the NFL & soccer to Orca Whales & Love
on this hilarious episode, I have lunch with the most interesting and hilarious person on this planet, Mr. Chad Johnson, aka Ocho Cinco... NFL Player, now soccer player, and passionate about life, people and orca whales... get ready for the funniest most interesting podcast yet. You will laugh and definitely be inspired ..
44:14
May 28, 2019 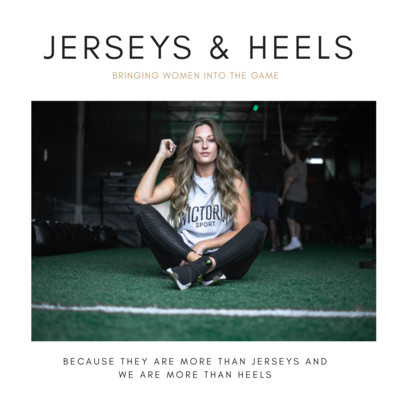 Payson Park: Where The Billionaires Keep Their Horses
5 of the top horse trainers in the world and 3 horses in this year's Kentucky Derby, we sat down with the GM and man in charge of one of the world's most noted equestrian training facilities. Payson Park is in south Florida, over 500 acres of history, Mr. Larry Kelly shares some of his story as a horse trainer  and WHAT his take is on the Kentucky Derby drama ... We had a blast, thank you sir!
18:36
May 21, 2019

From Football Player to Citrus Grower: Home of Uncle Matt's Organic OJ
Sam and Haley sit down with Papa Benny, a citrus grower in Florida and also the dad of  Matt, from Uncle Matt's Organic Orange Juice. It was NFL Draft Day this day, so we tried to compare the draft to picking peaches, but really we were just entertained by all the knowledge from this man's brain. Papa Benny is good 'ole southern boy who loves football and loves talking to his produce... So grab a glass of sweet tea (or celery juice) and enjoy this episode full of peaches and whole lot of southern charm...
26:45
May 07, 2019

Ernest Wiggins USA Olympic Track: Motivation, Inspiration & Dessert
An incredibly inspiring & entertaining podcast with USA Olympic track athlete Ernest Wiggins. What does it take to get too the Olympics? What's it like to run again Usain Bolt?  And what will he name our starfish?! You don't have to wait to the end because in the first 5 minutes he just couldn't help himself but to give her her new name!  We would SO appreciate  you to HELP us by reviewing our podcast! Thank you SO much!! Wow!
39:49
April 30, 2019

The Crazy Superstitions, Sex & Socrates in Sports
This episode we are live from East End Market and talking about athletes and their superstitions and all the controversy around everyone's favorite thing... SEX. And obviously drinking our coffee and whatever green juice Sam has this episode.
23:12
April 19, 2019

Brandon Marshall: One of NFL's best receivers ever, Mental Health Advocate & and why he went plant-based foodie
B-Marsh could be known for his controversial and passionate personality on and off the field but it is also known that he is leading this country through mental health advocacy and inspiring young dreamers. We hung out at his gym in Ft. Lauderdale, Florida for a little bit of fitness, faith, food and history behind him and Haley's hilarious and cool beginning of a friendship! What will he name the starfish?
32:15
April 19, 2019

Chuck Mercein: NFL legend from the Ice Bowl & Playing golf with Donald Trump
If you google his name, you won't see any pics of his regular golf outings with Trump, but you will see this NY "Wall Streeter"  playing in the NFL, and specifically in the ICE BOWL... What's the Ice Bowl? Well it's technically the first Super Bowl ever, and because of the adverse conditions in which the game was played, the rivalry between the two teams, and the game's dramatic climax, it has been considered one of the greatest games in NFL history. Ps. He does divulge about Trumps swing... stay tuned
30:09
April 19, 2019

Jon Brown: African American Kicker in the NFL & Kombucha taste testing
His story is absolutely insane and will inspire you to believe in the IMPOSSIBLE! Not only being the only African American kicker in the NFL but what about never even kicking a field goal in college and ending up kicking in the NFL? In this podcast, Jon also reveals his favorite white girl Netflix guilty pleasures and we have a kombucha tasting...
48:30
April 19, 2019

Welcome to Jerseys and Heels, this is going to be fun!
This episode is short and sweet, just a quick welcome to you and a little introduction from us about who we are and WHY we started this podcast in the first place! Two girls who love sports and want to bring you into the game !
14:26
April 19, 2019