Own Your Time Podcast

By Kyle Marcotte
Kyle is an expert at raising capital. He was able to raise over half a million dollars and close his first deal in just 4 months at the age of 20 years old. Since then, he has grown his real estate portfolio to 119 units, valued over 5.5 million dollars.

Kyle helps new investors buy their first deal in under 12 months without using any of their own money. While raising over 1 million dollars as a 20 year-old, Kyle saw all of the obstacles that new investors will face and has developed proven systems to overcome these barriers and do huge deals, regardless of age or experience. 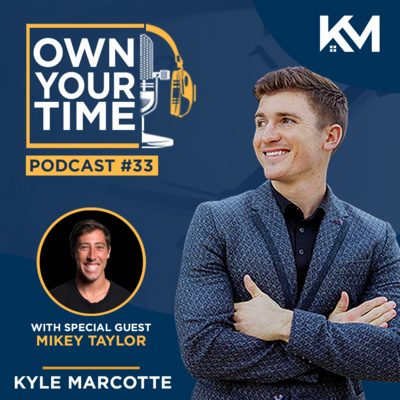 OYT 34: Mikey Taylor - How to Use Your Brand to Build Your Business from the Perspective of a Pro Skater
Mikey Taylor is the current President and Managing principal of Commune Capital, a private equity real estate investment firm. A serial entrepreneur at heart, he first found success with nearly two decades of professional skateboarding. Throughout his career, Mikey held lucrative sponsorship contracts with DC Shoe Co., GoPro Cameras and Alien Workshop. Over his tenure, he had over 100 signature skateboard decks, 7 pro model shoes and was one of the most recognizable pro skateboarders on the planet. Not one to rest on his laurels, early in his career, he was already thinking about life after skateboarding. What’s next was co-founding and eventual launch of Saint Archer Brewing Company. This San Diego based craft beer company and its first of its kind business model, led to quick success and multi-million dollar purchase by MillerCoors Company in 2015. Since then, Mikey has been busy, co-founding Sovrn Skateboards, Avni Intelligence (an entrepreneur education platform and podcast) and most importantly Commune Capital. Armed with only a high school education, but more than a lifetime of real world experience, Mikey is committed to assisting the next generation define the new American dream. Born and raised in Southern California, Mikey Taylor resides in Thousand Oaks, with his wife Jen and their two young daughters.
23:44
June 26, 2020 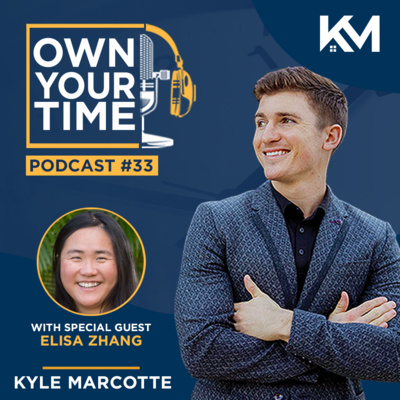 OYT 33: Elisa Zhang - Going from a BiggerPockets Newbie to Owning Over 1000 Units
Elisa Zhang got started in the 2008 financial crisis with the goal of quitting her job. She reached and blew past that goal and now helps typical 9-5ers to do the same. You'll get to hear her story of how she graduated from reading BiggerPockets blogs to owning 1000 units of multifamily apartments.
23:15
June 19, 2020 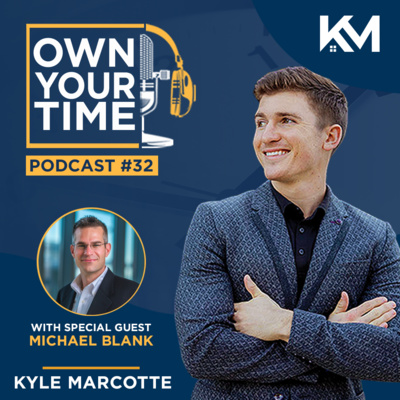 OYT 32: Michael Blank - Why the Stock Market is a Fox in Sheep's Clothing
Michael Blank is a leading authority on apartment building investing in the United States. He’s passionate about helping others become financially free in 3-5 years by investing in apartment building deals with a special focus on raising money. Today, Michael talks about finding a mentor, understanding the stock market, and more.
24:33
June 12, 2020 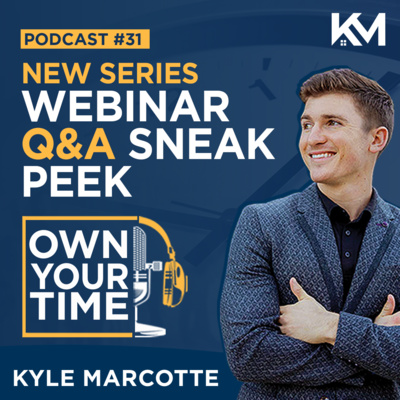 OYT 31: Make Smarter Offers with a Deal Analyzer - Webinar Q&A
This is the Q&A section from Kyle's weekly webinar syndication series. He answers questions live from viewers about syndication, underwriting, talking to brokers, and more.
13:45
June 8, 2020

OYT 29: How Do I Find My Purpose?
How can I find hope meaning and purpose? We all want to lead a meaningful life, but what are the steps to being living in that way? Books mentioned Grit - Angela Duckworth Ego is the Enemy - Ryan Holiday Mindset - Carol Dweck
13:57
June 1, 2020

OYT 27: The 5 Levels of Wealth - Why Hard Work Doesn't Equal Success
There are 5 levels to the game of money. On this episode we discuss what those five levels are and how to get all the way to level 5. There are common pitfalls at each level! Be sure to stay tuned till the end to learn them all. Free Coaching Call
15:08
May 25, 2020

OYT 26: How to Choose a Market to Invest In
How to pick a market, what metrics to look for and where to find them! Get the free market handout guide when you sign up for a free coaching call!
16:33
May 22, 2020

OYT 25: Don't Like Paying Taxes? Listen To This.
Today we interviewed Alex Shandrovsky and Michael Brady from Madison 1031! They are experts on 1031 exchanges and gave some great insights on how to use 1031s effectively to deffer your capital gains tax.  Alex - Linked In Michael - Linkedin
35:10
May 20, 2020

OYT 24: Why Can't I Stay Motivated?!
Do you struggle to keep up your motivation? One day you're flying high and the next day you can barley find the motivation to get out of bed. If that sounds like you, then you HAVE to listen to this episode  Instagram: Kylemarcotte9 Free Coaching Call
14:30
May 18, 2020

OYT 23: 99% of people think like this...
There is two current views on success. First is compete, throw elbows, and win at all costs. The second view is "thats not for me, I'm just going to settle, why bother." Both of these views are WRONG. There is a better way.  @Kylemarcotte9 Find out more info on 1 on 1 coaching with Kyle
14:37
May 15, 2020

OYT 22: The Easy Way Fallacy
On this episode I discus why the easy way actually leads to far more pain and struggle than the perceived "hard" way of doing things.  FREE CASE STUDY - Learn exactly how I raised over half a million dollars in just 4 months at 20 years old.
16:38
May 11, 2020

OYT 21: Jake and Gino - How two men challenged the status quo to become financially free.
On this episode we got to interview both of the co-founders of Wheel Barrow Profits, Jake and Gino. They shared their story of how they went from a pizza guy and a drug rep to owning over 100 million dollars of real estate. Jakeandgino.com/honeybee
26:56
May 8, 2020

OYT 19: Evan Holladay - How To Connect Your Passion With Your Business
Evan Holladay is a real estate developer and investor with over $225 million and 1347 units of multifamily real estate developed and invested. Evan is Founder and CEO at Holladay Ventures where their team specializes in creating and investing in workforce, affordable and mixed-income communities. Website:  www.evanholladay.com www.holladayventures.com www.coachwithevan.com Instagram: @evanholladay
17:00
May 4, 2020

OYT 17: How to Stop "Overthinking"
Are you an over thinker? Well, then this episode is for you! Mentorship: Kylemarcotte.com/Mentorship
05:34
April 15, 2020

OYT 16: Are Low Cap Rates Bad?
Should you invest in low cap rate markets? How do you make money when cap rates are so low? These are some of the questions we answer on todays show!  Mentorship: Kylemarcotte.com/Mentorship  Instagram: Kylemarcotte9
11:15
April 15, 2020

OYT 15: How to Make Money in Real Estate!
This episode is a clip from a call with a  mentorship student of mine. We covered a lot of great topics and I wanted to share some of it with you guys! If you're interested in Mentorship Coaching with me you can sign up here: kylemarcotte.com/coaching
16:37
April 14, 2020

OYT 14: Hadar Orkibi - How to Stay Focused and Avoid the Shiny Objects
Hadar Orkibi has been in real estate for over 20 years! On this episode he walks you through the process of selecting a market and his most recent Multifamily deal. MFI Giveaway: https://mfiholding.com/free-ebook-multifamily-investing/ MIH Mastermind: https://mihmastermind.com/
36:34
April 13, 2020

OYT 13: Why it is not your fault that you're undisciplined
Discipline gives you freedom. We all know this, but why is it so hard to stay the course and be discipline?  Your brains expectation and tolerance for dopamine play a massive roll in the activities that you are motivated to do on a consistent basis. You have to recalibrate your perception of pleasure in order to be motivated to delay gratification.  Instagram: @kylemarcotte9 Website: Kylemarcotte.com
12:56
April 10, 2020

OYT 12: Mike "C-Roc" - What are you made of?
Mike "C-Roc" Ciorrocco is a motivator, public speaker and coach. He is the host of the #WAYMO podcast where he shares stories of his past experiences and how he used them as fuel to break through barriers in his life.  In this episode we talk about how to silence the negative voice in your head and take action on your dreams and goals. Instagram: Mikeycroc Website: https://themikecroc.com WAYMO Teens: https://www.waymocrew.com
15:56
April 9, 2020

OYT 11: Nick Ameluxen - How to overcome your self imposed limitations.
Nick is a partner at Quantum Capital. He closed 200 units in his first year of multifamily investing. This allowed to him to leave his job as a mechanic for Audi and VW. On this episode we dive into how Nick found his first partner, and we even talk about how he overcame his ADHD to achieve success that others told him he never would.  Quantumcapitalinc.com
15:31
April 7, 2020

OYT 10: Dave Mason - How to get money to work for you. So you don't have to work for it.
Dave Mason is a personal growth junky, entrepreneur and Novelist. He is the Author of The Cash Machine which is a book that talks about financial freedom and how to make money worth for you. Dave dropped some incredible wisdom on this show, I hope you enjoy!!! The Cash Machine: https://www.amazon.com/dp/B082P81146/ref=cm_sw_em_r_mt_dp_U_AM2HEb366K6FP Daves Knob Business: Knobs.co
14:15
April 3, 2020

OYT 9: Jerome Myers - How to choose your business partner
Jerome is a corporate America dropout who is helping others exit the matrix through ownership in multifamily work force housing. After building a 20 MM division at a construction company and having to layoff his teammates two years in a row, He'd had enough and decided to become a full time real estate entrepreneur. http://www.myersmethods.com/
12:23
April 2, 2020

OYT 8: Have you considered how COVID-19 will affect your property's water usage and utility bills?
On this episode, I talked with Anselmo Torres III and Kelly Stinson, CAS, from Sustainability Solutions. We discussed how property owners need to be prepared for a large increase in utility expenses due to residents being at home far more often. https://sasconserve.com
15:48
April 1, 2020

OYT 7: Matt Teifke - The power of networking!
Matt Teifke is a jack of all trades in real estate! He is a broker, property manager and investor! He owns 15 homes, a triplex, 8-plex and is a GP in 2 syndications. Matt makes this all happen by being a phenomenal networker. On todays show he shares his networking secretes!
15:24
March 31, 2020

OYT 5: Derek Loda - Why You Don't Have to Start in Single Family
Most people think you have to start in single family real estate before going on to commercial multifamily, but that is not the case! On this episode Derek Loda explains why!
17:10
March 26, 2020

OYT 4: How to never pay taxes again... LEGALLY!
The US Tax Code is a road map to wealth. It lays out step by step what to do with your money so that you will never have to pay taxes. 99.5% of the Tax code is focused on tax exemptions. only 30 pages of the 5,800 are focused on taking money from you. The government wants you to pay less in taxes and it instructs you how!
10:08
March 21, 2020

OYT 3: The Reason You AREN'T Making Money
Let's break down the beliefs that are currently preventing you from making the amount of money that you really want to make.
12:13
March 10, 2020

OYT 2: Antoine Martel - How to buy 10 homes a month and move into Multifamily from SFH!
Antoine Martel's company MartelTurnKey purchases over 10 homes A MONTH! Antoine has now moved to multifamily and has a portfolio valued at over 11 million dollars. Instagram: @martelantoine Website: https://martelturnkey.com Antione's Book: https://www.amazon.com/dp/B07XKWTJ72/
19:09
March 10, 2020 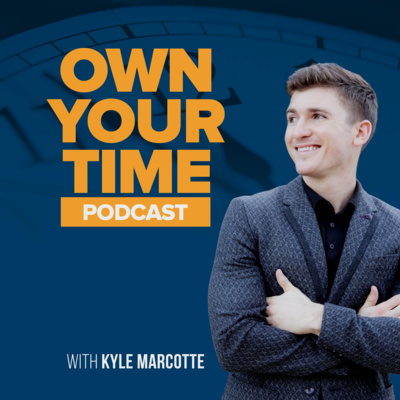