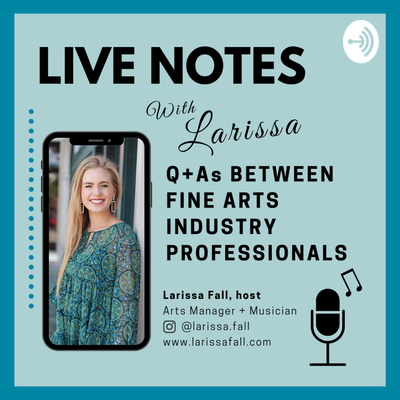 By Larissa Fall
Live Notes w/ Larissa is a podcast that dives into the worlds of fine arts industry professionals. After years of working in the music industry as an arts administrator and musician I have gained many friendships and insider knowledge about the interworkings of the arts. Join me as I sit down with noteworthy guests from many different backgrounds for live Q+As. We will learn more about their careers, their passions, and the importance of the arts.

Some of my talks will include deep conversations with musicians, performers, educators, composers, visual artists, and managers. 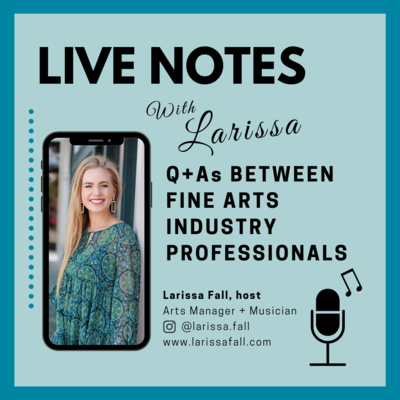 Bre Harris: Singer-Songwriter
Chicago born and raised singer-songwriter, Bre Harris currently serves as Worship Leader and Choir Director at Central Wesleyan Church in Holland, MI. She graduated with a B.A in Worship Arts from Cornerstone University. Passionate about diverse expressions of worship, she has collaborated with many artists such as Porters Gate, Matt Boswell, and Water’s Edge Worship to cultivate worship cultures that magnify unity in the body of Christ.
30:08
July 7, 2020

Carlos Aguilar: Stagehand
Carlos has been a stagehand in West Michigan for the past 26 years working with every arts organization in one form or another. He is currently a house person at the Van Andel arena. He is also a card holding member of IATSE local 26 and has been for over 20 years.
35:19
July 1, 2020

Julie Nystedt: Arts Administrator + Recovering Oboist
Julie has spent her career working in many different facets of arts management, but is currently enjoying her role as part of the Grand Rapids Symphony’s production team, where her focus is on everything that goes into putting a concert together behind the scenes. She earned a Master’s in Non-profit Management and undergraduate degrees in Music Performance and Organizational Communication. She is also a doting mom to her two rescue dogs, Finn and Charlie.
27:43
June 24, 2020

Kyle Viana: Production Stage Manager + Musician
Kyle Viana has been the Production Stage Manager for the Grand Rapids Symphony since 2013. His lifelong passion for music lead him to attend Ferris State University, where he graduated in 2011 with a B.S. in Music Industry Management and a minor in Special Event and Meeting Planning.  His love for music started early on. He got his first real guitar as a Christmas gift from his grandparents when he was 6 years old and went from taking lessons, to entering school talent shows, to playing in bands and making albums of his own. Most recently he's developed an interest in recording and mixing.   He also has a life-long love of fishing. When not at work in the concert hall, or playing his guitar, you can usually find Kyle on a river somewhere trying my best to catch a fish.
34:02
June 9, 2020

Natalie Frakes: Violinist + Music Educator
Natalie Frakes is a Detroit-based violinist, teaching artist, and music educator who believes deeply in using music as a vehicle for social change. When she’s not teaching, she keeps busy performing with some of Detroit’s best musicians and has been part of live productions for current artists such as the Aretha Franklin Orchestra, Wordless Music Orchestra, Kygo, Michael Bublé, Josh Groban, and more.   Natalie is a passionate educator and has devoted her time as a teaching artist and educator in the public schools and with El Sistema-inspired programs. She currently works with the Detroit Symphony Orchestra, Sphinx Organization, Detroit Metropolitan Youth Symphony, University Musical Society, and Hyde Park Suzuki Institute.
34:31
June 9, 2020

Michelle Pokley: Flutist + Music Teacher
Michelle Pokley is a flutist and teacher based in the Dallas-Fort Worth metroplex-area. She has given international solo and orchestral performances throughout North and South America, France and Germany. Michelle has won top prizes in many competitions including the Maverick Flute Soloist Competition, the Bowling Green State University Concerto Competition, the Douglas Wayland Chamber Music Competition, among others. Michelle holds performance degrees from the Manhattan School of Music and Bowling Green State University.  Her principal teachers include Linda Chesis, Dr. Conor Nelson, Jeffery Zook, Joel Tse, and Brandy Huddelson.
35:37
June 9, 2020

Kayla Green: Violinist + Arts Administrator
Kayla Green is a violinist and arts administrator pursuing a Master’s degree in violin performance at Michigan State University. She has actively sought a broad range of experiences during her musical studies, ranging from working as an instructor at the MSU Community Music School, member of the Development department of the Grand Rapids Symphony, orchestra librarian for the MSU Orchestras, and staff member for the Meadowmount School of Music and Philadelphia International Music Festival. Kayla is passionate about using her love for music to address social injustices, and founded a nonprofit in 2019 that puts on music events to raise awareness for human trafficking. Since transitioning online in response to COVID-19, her organization’s digital performances have reached over 18,000 people with eclectic music and information about human trafficking. Her favorite performances have included those in New York City’s National Opera Center and Barco Ducale in Italy.
28:55
June 6, 2020

Andrew Genemans: Bassoonist + Contrabassoonist
Bassoonist and contrabassoonist Andrew Genemans joined the Grand Rapids Symphony in January 2018. A native of Akron, Ohio, he graduated from Carnegie Mellon University with a Master’s Degree in Music Performance as well as an Advanced Musical Studies Certificate. His undergraduate studies were at the Baldwin Wallace Conservatory of Music.  Andrew is an avid orchestral musician, performing with such renowned ensembles as The Philadelphia Orchestra, the Pittsburgh Symphony Orchestra, and the Houston Symphony Orchestra among others. In 2012, Andrew performed with members of the Cleveland Orchestra in a live broadcast of Mozart’s Serenade No. 11.  Andrew is an active soloist on both bassoon and contrabassoon, most recently performing Vivaldi’s Concerto in E Minor for Bassoon and Orchestra with Resonance Works | Pittsburgh. In February 2014, Andrew performed the world premiere of Mark Fromm’s Lingua Cosmica for solo contrabassoon and chamber ensemble with the Carnegie Mellon Contemporary Music Ensemble under the direction of Daniel Curtis.  Andrew has spent the last three years as a prestigious Contrabassoon Fellow at the Aspen Music Festival and School, studying with Per Hannevold and Michael Sweeney. His primary bassoon teachers include Nancy Goeres, Jonathan Sherwin, and Renee Anthony Dee, plus contrabassoon studies with Jonathan Sherwin and Jim Rodgers.  In his spare time, Andrew enjoys reading, discovering new music and art, watching stand-up comedy, and writing poetry.
35:01
June 6, 2020

Amanda Ly: Singer Songwriter + Musician
Amanda Ly is an Artificial Intelligence Architect living in Berlin, Germany. Ever since picking up piano and guitar at 16, she has been channeling her emotions and energy into writing honest, emotional songs in hopes of reaching others with her words and melodies. Her music is alternative pop with inspiration from Lorde, Alice Merton, James Bay, Passenger and Julia Michaels.  In 2015, Amanda spent two years in Nashville pursuing a career as a full time singer songwriter. But she defies the rules of the industry: instead of shooting for radio-friendly, her music seeks to change the world through lyrics of positive inspiration and social commentary. Her mission is to inspire and change the hearts of the world, one song at a time. Among the topics addressed in her songs are allowing passion and joy to lead one’s life despite adversity (“Set the World on Fire”) and the surprise of falling in love with someone unexpected (“Trashed My List”). Amanda draws from her life experiences and those of others to promote important messages. She is currently recording a new album to bring awareness and understanding to the stories of sexual assault victims.  www.soundcloud.com/AmandaLyMusic
37:42
June 6, 2020

Amy Rhudy: Operations Manager
Amy graduated from Grand Valley State University @gvsu with a degree in accounting. She currently works as the Operations Manager for a performing arts venue in Northern Michigan. In her position at the arts center, she coordinates artist logistics as well as assists with the day-to-day financial management. She loves how her job combines her passion for the performing arts with her accounting background. Amy also plays piano and enjoys reading and traveling.
25:46
June 6, 2020

Thomas Pike: VPO Artistic Director, Instrument Repair Technician, Oil Painter
Thomas Pike lives in Grandville, MI with his wife Kara, children Elaina and Miles, and 4 cats. He is the Repair Shop Administrator for Meyer Music, the Artistic Director of the Vintage Parlor Orchestra, and an Oil Painter in his spare time. Originally from Hudsonville, Thomas earned a degree in Communication from GVSU, while his studies of classical music and painting are largely self-taught.
31:22
June 6, 2020

Jordan VanHemert: Music Professor
Jordan VanHemert began his career teaching at Hope College @hopecollege @hopecollegemusic in 2019. At Hope, he teaches courses in saxophone and jazz studies. He holds a DMA from the University of Illinois, MM from the University of Michigan, and a BME from Central Michigan University. VanHemert is the curator of a new jazz series at the Holland Area Arts Council called Jazz at the Gallery. In addition to his duties at Hope, Jordan is the Music Director of the Holland Concert Jazz Orchestra, a 501 (c)(3) nonprofit organization in its 2nd year of operations. In addition to his own forthcoming album, Jordan was recently the Music Director for an album with saxophonist Derek Brown.
40:06
June 5, 2020

Rachael Ridge: Private Music Teacher + Mom
Rachael Ridge is a private music teacher and mom. She loves to workout, be outside, and read.
36:14
June 5, 2020

Josh Keller: Music Director, Performer, Theater Instructor
Josh is a Music Director, performer, and theater instructor from Grand Rapids. Credits include Frozen Jr., All Shook Up!, Freaky Friday, among others. He loves being on stage in any performance capacity, for it has allowed him freedom of expression and so much support and friendship from those in this community. IG: @joshkellermus
39:05
June 5, 2020

Eve Panning: Violinist, Fiddler, Music Educator
Join me in my 3rd episode of live notes as we talk with Eve Panning. Eve graduated with a double major in violin performance and music education from Hope College. Immediately following graduation, she spent a few years touring with high energy string ensemble "Barrage 8." She now lives in Colorado, where she performs with bluegrass band "The Lonesome Days," as well as teaches elementary and middle school orchestra.
32:21
June 5, 2020

Jacquie Shannon: Cellist + Secondary Instrumental Educator
Join me & guest Jacquie for the second live Q+A in my new series Live Notes with Larissa. These live Q+As are between myself and fine arts industry professionals. Jacquie is a cellist and Secondary Instrumental Educator. She graduated with her bachelors in Music Education from Hope College and is finishing up her 6th year of teaching middle school orchestra. Larissa has degrees in Violin Performance and Arts Administration.
33:43
June 5, 2020

Madalyn Navis: Violinist + Music Educator
In this first episode meet Madalyn Navis, a violinist and music educator. Madalyn and I both attended the same college and got degrees in music. Madalyn went on to get her Master's degree in violin performance and has experience performing in orchestral settings across the United States. She worked as a graduate assistant for BGSUs string quartet program. We talk about her performing, her advice, and her teaching during COVID-19.
33:54
June 5, 2020

Lives Notes with Larissa: Intro
Live Notes w/ Larissa is a podcast that dives into the worlds of fine arts industry professionals. After years of working in the music industry as an arts administrator and musician I have gained many friendships and insider knowledge about the interworkings of the arts. Join me as I sit down with noteworthy guests from many different backgrounds for live Q+As. We will learn more about their careers, their passions, and the importance of the arts in today’s culture. Some of my talks will include deep conversations with musicians, performers, educators, composers, conductors, visual artists, and arts managers. The arts bring us joy, help us to express ourselves, and voice societal truths that go beyond words.  As a classically trained violinist with a Master’s Degree in Arts Administration I have met many individuals who contribute to these performing arts in different capacities. Join me as we take a deep dive into the word of the arts and talk with the creators who make it all happen. Connect with me on my instagram account @larissa.fall and learn more at my website, larissafall.com.
02:06
June 5, 2020