From Atmosphere to Experience: A Contemporary Evolution of Interior Design

Curated and organized by MDFF Greece’s Director Annie Markitanis, this podcast series is a sequel to the homonymous article written for the festival’s catalog by Daniel Gava, Brand Strategy Advisor to the Architecture and Design Industry. The podcast series sees guests from the cultural, design, and architecture sectors who examine the different facets of design, and the changes signaling it through time via topics pertinent to their work and experience. The podcast series features original music composed by Rosita Kèss, “Obikè” from her upcoming album “Yèlèma”. www.rositakessmusic.com 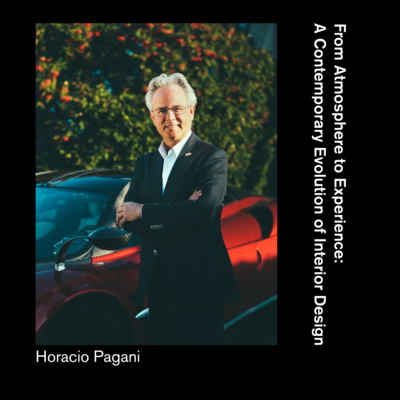 Horacio Pagani | From Atmosphere to Experience: A Contemporary Evolution of Interior Design

From Atmosphere to Experience: A Contemporary Evolution of Interior Design • By MDFF Greece—Athens • Dec 17, 2021 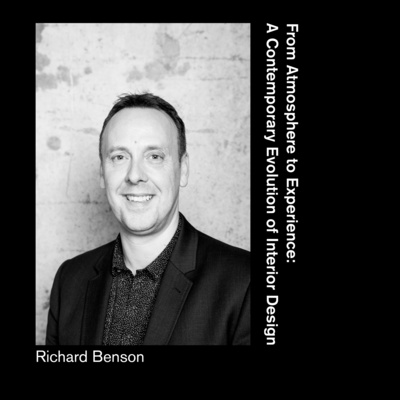 Richard Benson | From Atmosphere to Experience: A Contemporary Evolution of Interior Design
In the third episode – curated by Annie Markitanis and organized/hosted by Daniel Gava and Annie Markitanis, we are joined by Richard Benson, Creative Managing Director at Fjord part of Accenture Interactive. This talk revolves around the different lives, faces, and dimensions of experiential design: From deciphering the essence of a great customer service today — a sum-up of discovery, research, market analysis, and differentiation, to the current trends for designing experiential environments a lot of which have been shaped by our globally shared experience of the pandemic. From Metaverse bridging the virtual experience with the real-world experiences, and places that interact with the digital world to discussing such notions as the value of authenticity, inclusivity, diversity, and the art of getting to know your customer/brand. From sustainability and how it has become fundamental that a brand’s ethicality is directly reflected in the habitat that represents it, to the essence of being interactive and the variability in being so via technological advances and newly formed expectations on information. We extend our talk to today’s knowledgeable and conscious user being both a blessing and a challenge with people being less patient, immediacy having the upper hand, and overall witnessing less tolerance in the value customers give to products and spaces that do not deliver, or waste their most valuable asset — their time.’ From micro-moments — a service design term referring to intent-rich moments when decisions are made and preferences are shaped, to the role interior design serves today's retail spaces in responding to shoppers' desires, as well as creating differentiated experiences and concepts via a given appearance and usability of an environment. About Richard Benson: 30 years experience in the creative industry Richard has spent the past 22 years specialising in experiential design for Financial Services, Retail and Telco’s clients at Allen international, now the space design practice of Fjord I Accenture Interactive. With a background in graphics, retail interior architecture and brand design, Richard has worked on establishing innovative propositions, brand identities and design solutions for a wide range of international brands. Since joining the leadership team of Accenture Interactive and becoming the Lead of the Fjord Studio in London, Richard has founded new capabilities and offerings including Workplace Experience, blending a deep knowledge of agile design principles and technology, space and brand cultures to create rewarding, productive innovation experiences for organisations and their colleagues. Richard has most recently been developing with the team new experiences for the Metaverse that harness the power of Extended Reality to make rapid prototyping in virtual platforms, as well as creating global team collaborative experiences in VR worlds unique to the brands Fjord & Accenture partner with. A continued passion for creating unique physical experiences, brand propositions and above all else; customer experiences that surprise and delight, are driving factors in Richard’s career.  “The power of design to solve problems, create new commercial opportunities and differentiate the brands we work with continues to amaze, inspire and fuel me. To combine creativity and lateral thinking to produce memorable experiences from simple interactions, across 3D, 2D and digital media. Working as part of a creative team with such a diverse range of specialist skills and expertise, each at the top of their game, all with a unified goal to shape the propositions of leading and emerging brands. To build design strategies, environments, graphic communications, and brand identities that will resonate with consumers on a practical and emotional level, inspiring and transforming behaviours in the staff that represent the brands…nothing could be better!’ (Richard Benson).
35:54
February 13, 2022

Horacio Pagani | From Atmosphere to Experience: A Contemporary Evolution of Interior Design
In the second episode we are joined by Horacio Pagani, the Founder and Chief Designer of Pagani Automobili. Pagani Automobili S.p.A. is an Italian Hypercar manufacturer founded in 1998 and based in San Cesario sul Panaro, Modena, Italy. The philosophy driving the company embraces a concept borrowed from the Renaissance and embodied by the great Leonardo da Vinci who, over 500 years ago, once stated: “Art and Science are disciplines that must walk together hand in hand.”Pagani Automobili creates in accordance with this inspirational creed, combining technique and taste, functionality and aesthetics, handcraft work and technological know-how. In this episode, we talk about the Pagani DNA and lifestyle; the faces of design and how they play out within the frame of an automotive company. Moreover, we discuss the birth and strengthening of the Pagani Art Division expressed in bespoke interiors of airplanes, helicopters, hotels, and so forth; the Pagani’s awaited Milan based office, an exemplar of the fusion between the supercar culture with the design culture, as well as the upcoming revolutionary project “Vision 2030”. We touch upon the current challenges within the automotive industry with everything changing and fundamental concepts such as rethinking and questioning the heat engine coming in the forefront. Horacio Pagani was born in Casilda. At the age of 14, he discovered the genius of Leonardo Da Vinci and the philosophy that would influence his entire career: Art and Science are disciplines that can go hand in hand. At the age of 21, he built an entire Argentine F2 single-seater, which competed in the official Formula 2 championship and caught the eye of F1 world champion Juan Manuel Fangio thanks to whom he moved to Italy in 1983. He started working at Lamborghini as a third-level worker and subsequently worked on the design and construction of the Countach Evoluzione, the first car with a chassis made of composite materials. He then participated in various projects, including the Countach Anniversary and the Lamborghini LM. In his final years working with the company, he was appointed head of the Composites Division and became Automobili Lamborghini's in-house designer. In 1993 he founded Modena Design, while simultaneously leading the design and end-to-end development of the C8 Project, a car that would be officially presented in 1999 at the Geneva Motor Show as the Zonda C12. Acclaimed by the international press as a futuristic and revolutionary car, so much so that the term hypercar was coined for the occasion, Zonda soon became one of the most celebrated cars of the last 20 years and officially marked the birth of Pagani Automobili. The Pagani Huayra was presented in 2011, the first car in the world equipped with active aerodynamics and built using the latest generation of composite materials such as carbon fibre and carbo-titanium, all based on the know-how of Pagani Automobili. Winner of the three most prestigious awards in the sector, such as Car of the Year in 2012, Huayra represents the perfect combination of scientific and artistic research that originated in the thinking of Leonardo da Vinci, today a fundamental part of the Pagani DNA. Research on state-of-the-art composite materials and continuous investment in the study of new methodologies, fibres, resins and paints have always been a constant in Horacio Pagani’s activity, a mission that has resulted in an extremely specific production method. The Pagani Atelier, originally born from one man’s dream, currently employs a team of more than 170 people, including technicians, engineers and craftsmen who all share that same passion and continue to propagate its concepts and methodologies. The theoretical foundations and technologies developed by the Atelier continue to find new outlets, 35 years on, through the use of composite systems in many sectors, including medical, nautical and aerospace.
34:51
December 17, 2021 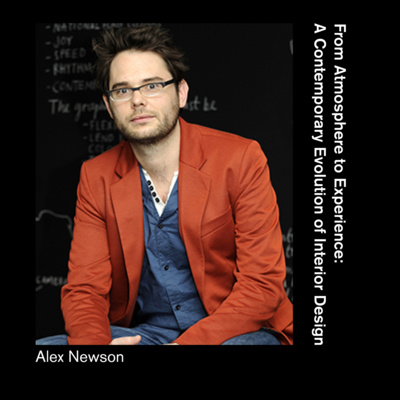 Alex Newson | From Atmosphere to Experience: A Contemporary Evolution of Interior Design
For the first episode, co-hosted by Annie Markitanis and Daniel Gava, we are joined by the Senior Curator of the Museum of Childhood at the Victoria and Albert Museum, Alex Newson. As Chief Curator at the V&A Museum of Childhood Alex leads the curatorial and collections teams, who are currently engaged in a major new capital project to renovate the museum and revitalize its collections. Prior to joining the V&A Alex worked as Senior Curator at the Design Museum where he led the curatorial team that developed the museum’s first-ever permanent gallery. As a specialist in contemporary design and architecture, Alex has curated numerous temporary exhibitions including retrospective exhibitions on designers Dieter Rams and Hella Jongerius and architects Louis Kahn and David Adjaye. Alex has written and contributed to various books, journals and magazines, commentating on wide-ranging themes relating to design and museum theory. Together we will discuss the role of design and architecture within the V&A’s experiential identity  and overall objectives. Most specifically we will address the museum’s ongoing project transforming it into a new world-leading museum of design and creativity for children and young people. Since the museum's founding in 1872, the V&A Museum of Childhood has been a much-prized and welcoming community space for everyone. As it approaches its 150th anniversary, with a unique story to tell as East London's first public museum, it is being reinvented through new eyes. The new V&A Museum of Childhood will become the UK's first national museum designed by, and for, young people – a place where you can learn, create and debate together, and design for tomorrow. The podcast series features original music composed by Rosita Kèss, “Obikè” from her upcoming album “Yèlèma”. www.rositakessmusic.com
35:43
July 30, 2021