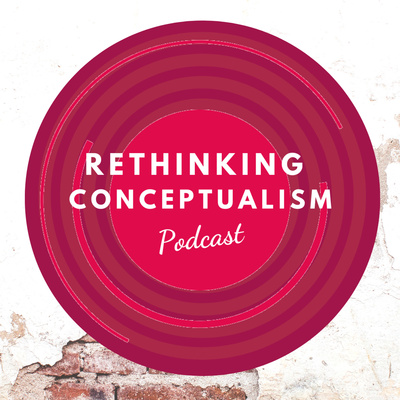 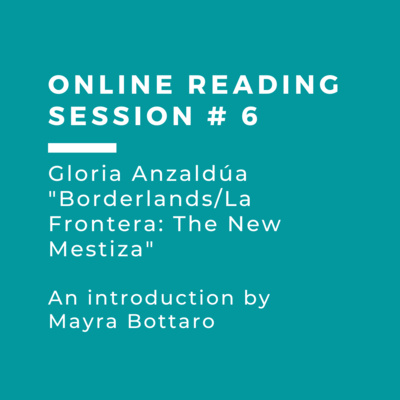 Online Reading Session #6 Gloria Anzaldúa "Borderlands/La Frontera: The New Mestiza", introduced by Mayra Bottaro
In  this session, Mayra Bottaro gave an introductory presentation of the book "Borderlands/La Frontera: The New Mestiza" by Gloria Anzaldúa, a publication that addresses topics such as Chicano culture, identity, race, gender and colonialism.   Abstract of the book:   Rooted in Gloria Anzaldúa's experience as a Chicana, a lesbian, an  activist, and a writer, the essays and poems in this volume profoundly  challenged, and continue to challenge, how we think about identity.  "Borderlands/La Frontera" remaps our understanding of what a "border"  is, presenting it not as a simple divide between here and there, us and  them, but as a psychic, social, and cultural terrain that we inhabit,  and that inhabits all of us.  The book is divided into two parts. The first, "Crossing Borders", is  written mostly in prose, and moves between memoir and critical theory,  interspersed occasionally with poetry and quotations from other  thinkers, poets, and singers. Anzaldúa also switches between Spanish and  English, and between more casual and "academic" ways of writing. The  second part, "Un Agitado Viento/Ehécatl, The Wind", is entirely poetry.    MAYRA BOTTARO received her PhD in Hispanic Languages and Literatures  from UC Berkeley. She is assistant Professor at the University of Oregon  and currently co-directs the Nineteenth Century Section of the Latin  American Studies Association (LASA). Her book "Chronopolitics. New  Media, Periodicity and Seriality in the Hispanic Atlantic, 1750-1880"  (forthcoming in 2021) examines the links between material culture,  media, and temporality and identifies a series of changes in the  understanding of time and the notion of futurity, showing how the  aesthetics of seriality became embedded within epistemological changes.  She is currently working on her second monograph, "Scrambled Messages:  Telegraphic Poetics and the New Atlantic Language", at the intersection  of materialities of new media, theories of language, poetics and  artistic experimental practices, and on a Digital Humanities project  "Archivo Organizado y Centralizado de Rubén Darío" at Universidad  Nacional Tres de Febrero (UNTREF), Argentina.    Introduction, moderation and audio editing: Katerina Valdivia Bruch We would like to thank the participants for their questions and Mayra Bottaro for her inspiring introduction on Anzaldúa's book.  The online reading session took place on 29 October 2020.
30:08
April 08, 2022 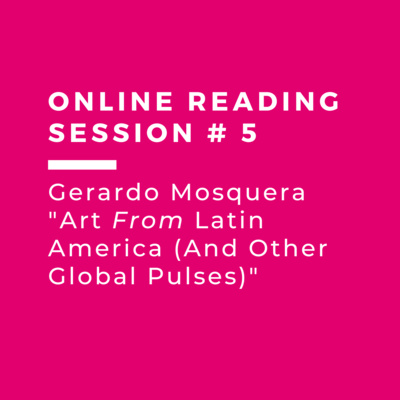 Online Reading Session #5: Gerardo Mosquera "Art From Latin America (And Other Global Pulses)"
Online  Reading Session #5: Gerardo Mosquera "Art From Latin America (And Other Global Pulses)" In this session, we discussed with Gerardo Mosquera questions around  the definition of Latin American art and the Latin American identity. In his essays, Mosquera revisits these categories and reflects on how Latin American art has been included in the global art circuits, and warns us about the dangers of using fixed categories that might lead to a self-exoticism.   Part of the discussion was dedicated to his newest publication "Arte desde América Latina (y otros pulsos globales)" (Art From Latin America (And Other Global Pulses)),  an anthology of essays written from 1992-2017, edited by Cátedra (Madrid) in 2020. GERARDO MOSQUERA is an independent curator, writer, art critic and historian  based in Havana and Madrid. He is advisor to the Rijksakademie van  beeldende kunsten, Amsterdam, and member of the advisory board of several international art centres and journals. He was co-founder of the  Havana Biennial, Curator at the New Museum of Contemporary Art, New  York, Artistic Director of PHotoSpain, Madrid, and has curated a number  of biennials and international exhibitions around the world, most  recently the 21st Paiz Art Biennial, Guatemala, and "Useless. Machines  for Dreaming, Thinking and Seeing", Bronx Museum, New York. He recently co-curated the 3rd edition of "Today Documents" for the Today Art Museum in Beijing. Mosquera received the Guggenheim Fellowship in 1990 and is author of numerous publications on contemporary art and art theory. His  latest book is "Arte desde América Latina (y otros pulsos globales)",  published this year. Introduction, moderation and audio editing: Katerina Valdivia Bruch We would like to thank the participants for their questions and Gerardo Mosquera for being with us. Note: The audio source was not the best and we were not able to change it. We hope you can enjoy the content despite some sound interferences. The online reading session took place on 24 September 2020.
15:50
October 27, 2020 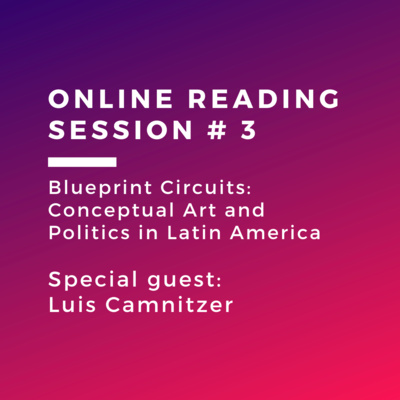 Online Reading Session #3 "Blue Print Circuits: Conceptual Art and Politics in Latin America". Special guest: Luis Camnitzer
In this session, we discussed two essays by Mari Carmen Ramírez: "Blueprint Circuits: Conceptual Art and Politics in  Latin America" and "Tactics for Thriving on Adversity: Conceptualism in Latin America". Our special guest was Uruguayan artist Luis Camnitzer, who commented Ramírez' texts, spoke about his own theory on Latin American conceptualism and reflected, amongst other topics, on art, pedagogy, the role of the museums, and art as a tool for social transformation. LUIS CAMNITZER is  a Uruguayan artist, who lives in the United States since 1964. He is a  Professor Emeritus of Art at the State University of New York, College  at Old Westbury. He received a Guggenheim Fellowship for printmaking in  1961 and for visual arts in 1982. In 2011, he was awarded the Frank  Jewitt Mather Award of the College Art Association. In 2012, he received  the Skowhegan Medal and the USA Ford Fellow award. He represented  Uruguay at the Venice Biennial (1988), and was one of the participating  artists during of the Whitney Biennale (2000) and documenta 11 (2002).  In 2007, Camnitzer was appointed Pedagogical Curator of the 6thBienal de  Mercosur. In 2018-19 the Museo Reina Sofía in Madrid did a  retrospective exhibition of his oeuvre. His work is in the collections  of over forty museums. He is the author of New Art of Cuba, University of Texas Press, 1994/2004; Arte y Enseñanza: La ética del poder, Casa de América, Madrid, 2000, Conceptualism in Latin American Art: Didactics of Liberation, University of Texas Press, 2007, On Art, Artists, Latin America and Other Utopias, University of Texas Press, 2010, and of the recently published anthology One Number Is Worth One Word, 2020. Introduction, moderation and audio editing: Katerina Valdivia Bruch We would like to thank the participants for their questions and Luis Camnitzer for being with us. The online reading session took place on 30 July 2020.
23:53
August 18, 2020 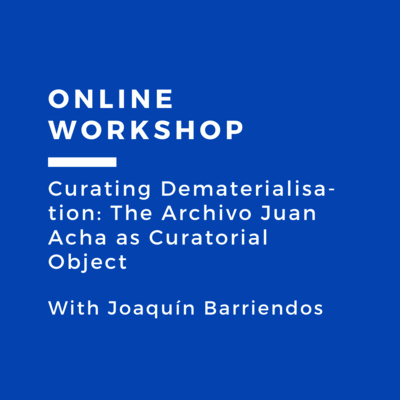 Online Workshop "Curating Dematerialisation: The Archivo Juan Acha as Curatorial Object", with Joaquín Barriendos (full version)
The aim of the workshop is to discuss the forms of circulation and  exhibition of documents/objects related to Latin American conceptualist  art and non-objectual art of the 1960s and 1970s. For this, we will take as a starting point the exhibition "Juan Acha. Revolutionary Awakening",  which was exhibited at the University Museum of Contemporary Art of  Mexico (MUAC) in 2017. In addition to reviewing the category  'dematerialisation', we will consider the usefulness of other concepts  such as 'artistic documentation' and 'site-specific document'. From these, we will talk about the division between work and document and  reflect on what is at stake when we are preserving, rebuilding or exhibiting non-objectual art. JOAQUÍN  BARRIENDOS is Associate Professor at UNAM (National Autonomous  University of Mexico). He writes on the intersection of Latin American  art and modernist aesthetic cosmopolitanism. He is the author of various  books, including "Archivos fuera de lugar" (2017), "Juan Acha.  Revolutionary Awakening" (2017), "Art Geography and the Global Challenge  of Critical Thinking" (2011), and "Geoestética y transculturalidad"  (2007). Introduction, moderation and audio editing: Katerina Valdivia Bruch The workshop was held on 8 July 2020.
01:00:23
August 07, 2020 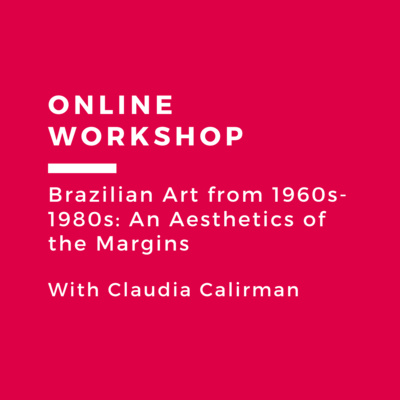 Online Workshop "Brazilian Art from 1960s to 1980s: An Aesthetics of the Margins", with Claudia Calirman
This workshop explores the period from the late 1960s through the 1980s,  in which prominent Brazilian artists claimed that their work existed at  the margins of society, both apart and alienated from the conservative social order, taking up the term "marginália" or marginality. To position oneself as a marginal was an active strategy, rather than a  passive position. These artists proposed an alternative strategy to  hegemonic artistic modes of production. They were influenced by the "Tropicália" movement, which merged the modern and the archaic, national  elements and international trends. These novel practices transcended  traditional mediums, eschewing the finished work of art in favour of  actions, interventions and propositions.   CLAUDIA CALIRMAN is Associate Professor at John Jay College of Criminal  Justice, New York, in the Department of Art and Music. Her areas of  study are Latin American, modern, and contemporary art. She is the  author of "Brazilian Art under Dictatorship: Antonio Manuel, Artur  Barrio, and Cildo Meireles" (Duke University Press, 2012), which  analyses the intersection of politics and the visual arts during the  most repressive years of Brazil's military regime, from 1968 until 1975.  The book received the 2013 Arvey Award by the Association for Latin  American Art. Calirman is a 2013 recipient of the Arts Writers Grant  from Creative Capital/Warhol Foundation and was the 2008-2009 Jorge  Paulo Lemann Visiting Scholar at the David Rockefeller Center for Latin  American Studies at Harvard University. She is a member of the  International Association of Art Critics (AICA). Calirman has curated  several exhibitions in New York, including "Berna Reale: While You  Laugh" (Nara Roesler Gallery, NY, 2019); "Basta! Art and Violence in  Latin America" (John Jay College, 2016); and "Antonio Manuel: I Want to  Act, not Represent!" (Americas Society, 2011). Introduction, moderation and audio editing: Katerina Valdivia Bruch The workshop was held on 10 June 2020.
20:51
July 14, 2020 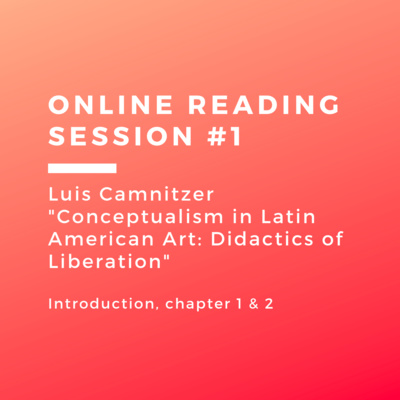