By Sherry
Sandwich Parents are ‘sandwiched’ between two generations, the one that raised us and the one we are raising. In order to be the parents we want to be, we have to work on the 'me' in parenting. We speak with many people who have chosen to raise their children very differently from the way they were raised. They share their stories and their journeys. 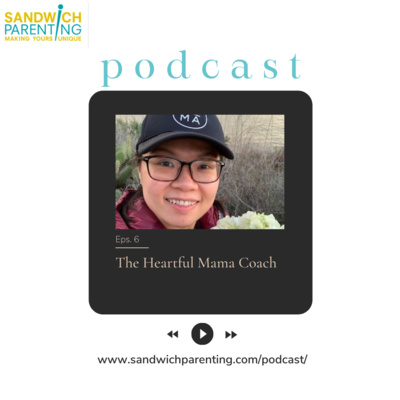 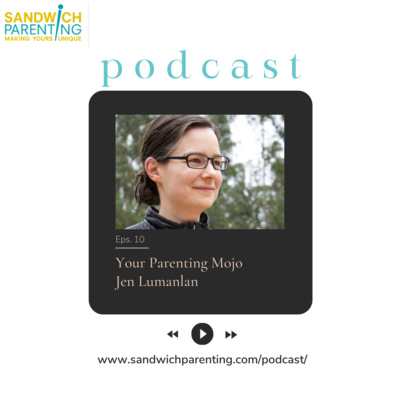 Jen Lumanlan: Your Parenting Mojo
Jen Lumanlan is the founder of Your Parenting Mojo, where she examines scientific research related to child development through the lens of respectful parenting. She is a prolific researcher, writer and podcaster. In our conversation, Jen touches on numerous topics that I think you will find profound and insightful. #sandwichparenting #consciousparenting #respectfulparenting #gentleparenting #peacefulparenting #yourparentingmojo #jenlumanlan #parentcoach
33:47
March 2, 2021 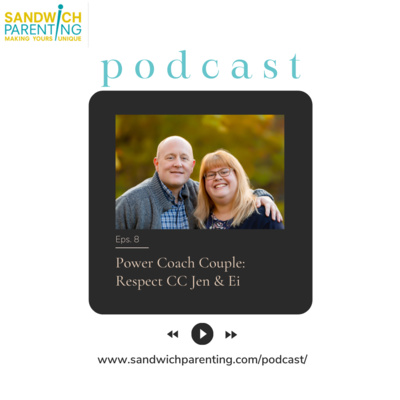 Power Coach Couple: Respect CC Jen and Eli
Eli and Jen are a husband and wife coaching team with two teen children.  They decided shortly after their first child was born they were going to parent differently than their parents did. They are professional coaches with years of training, certified by the World Coaching Institute as Child, Youth, Parent and Family Coaches. They work with parents who are dealing with toxic /dysfunctional / abusive parents trying to heal their childhood trauma to ensure they are not continuing the cycle with their own children. #sandwichparenting #consciousparenting #respectfulparenting #gentleparenting #peacefulparenting #respectcc #jenandeli #familycoaching #childhoodtrauma #breakthecycle
42:07
February 10, 2021 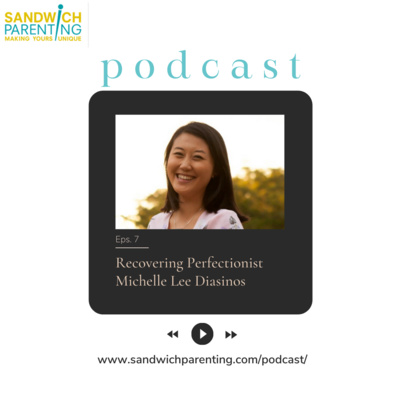 Recovering Perfectionist Michelle Lee Diasinos
Michelle Lee Diasinos, parent to two, is a Conscious Parent advocate, coach, author and co-host of The Mothers’ Roundtable podcast. Read her chapter in the #1 International Best Selling Change Makers Volume 4, where she shares her personal transformation that led her into this place of service to parents navigating their unique path. A recovering perfectionist, Michelle delves into the challenges parents face when perfection becomes a problem. One of the many exciting projects she's initiated is "Heal My Story" a platform for people to anonymously write about their healing journey. Join our chat and hear what she said that moved me to tears. #sandwichparenting #consciousparenting #respectfulparenting #gentleparenting #peacefulparenting #michelleleediasinos #healmystory #themothersroundtable #perfectionism
27:05
January 19, 2021

Lina Lie: The Heartful Mama Coach
After deciding that her Super Mom/Tiger Mom approach was not going to work (not too long after the birth of her son!), Lina Lie did her research and now is a parenting coach, focused on Peaceful Parenting. She shares her journey and how a peaceful parenting approach not only helped her be the kind of parent she wants to be, but it has also improved her marriage. Listen to our chat and find out how parent coaching can be the supportive, non-judgmental support you need. #sandwichparenting #consciousparenting #respectfulparenting #peacefulparenting #gentleparenting #linalie #theheartfulmamacoach
24:39
January 9, 2021 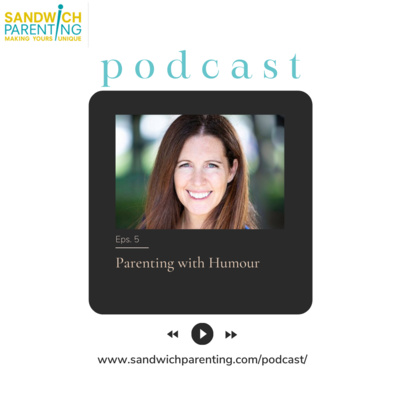 Parenting with Humour: Adrienne Hedger
Adrienne Hedger is the award-winning cartoonist behind the popular web comic “Hedger Humor.” Her work has been featured on popular media outlets such as BuzzFeed, The Huffington Post, Upworthy, Today.com, Yahoo!, Disney, and Nickelodeon. Several of Adrienne’s cartoons have become viral sensations, reaching tens of millions of people worldwide. We had so much fun on this episode where she shared her story and parenting approach. Parenting is ridiculous hard and humour really is the best way to deal with some of the frustrating moments. Read Adrienne’s hilarious and relatable cartoons at her Hedger Humor website, watch her videos on YouTube, like her Facebook page, and laugh along at Instagram. #sandwichparenting #consciousparenting #respectfulparenting #peacefulparenting #parentingwithumor #parentingwithhumour #hedgerhumor #adriennehedger
28:52
December 18, 2020 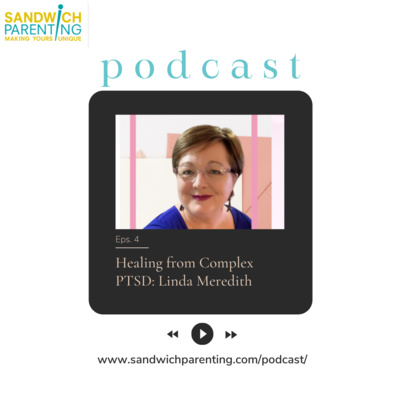 Healing from CPTSD with Linda Meredith
A Sandwich Parent who saved herself from a complete loss of cognitive functions to being Australia’s first Certified Trauma Recovery Coach, Linda Meredith truly knows what suffering from CPTSD is like.  Based out of Brisbane, Linda makes her trauma recovery expertise available globally through her YouTube channel, Healing CPTSD website, and Facebook community.  She wants you to believe in yourself and have hope.  She did it and she wants you to know you can too. #sandwichparenting #consciousparenting #peacefulparenting #respectfulparenting #parentingwithcptsd #lindameredith #healingfromcomplexptsd
27:11
November 26, 2020 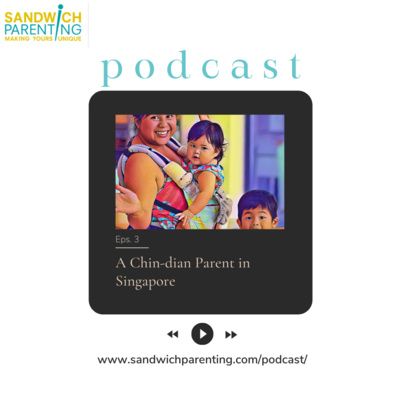 Joline Lim: A Chin-dian Learning Parent!
Joline Lim comes from a Chin-dian background (Chinese/Indian). Living in Singapore, a very competitive environment with a huge focus on academic achievement, Joline embraced Gentle Parenting, feeling there is much to learn from a variety of experts and approaches. Listen to our fun chat to learn about the journey to The Learning Parent SG where she advocates for respectful parenting with a Singaporean twist!
36:19
November 3, 2020 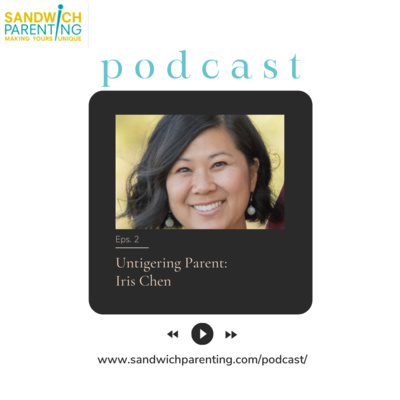 Iris Chen: Untigering Parent
Iris Chen played by the rules of society and was a great success by society's standards, but felt that those achievements didn't mean anything at the end of the day.  She is now on a journey of Untigering: which she defines as Gentle Parenting and Unschooling.  She is a deconstructing Tiger Mom, and in the process, brings us along to question our own upbringing and how we parent our own children. Listen to our podcast as we talk about interesting parenting topics such as obedience, past trauma, achievement, and consent-based living. #sandwichparenting #consciousparenting #parentingwithcptsd #irischen #untigering #gentleparenting #deconstructingtigermom #consentbasedparenting
40:08
September 17, 2020 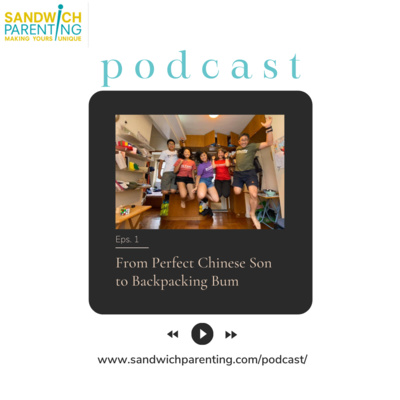 Su Family: From "Perfect Chinese Son" to "Backpacking Bum"
Jonathan and Annie Su have learned to preserve values they learned from their parents and to evolve new ones as parents themselves.  Breaking from traditional immigrant Chinese expectations, they live their lives defined by their own meaning and passion.  I interviewed Jonathan and Annie Su on the last day of their quarantine in Hong Kong, right before they left for their third family Gap Year. Find out why they are the epitome of Sandwich Parenting in our inaugural podcast episode!  Visit their website Su Family Adventures! #sandwichparenting #consciousparenting #parentingwithcptsd #jonathansu #anniesu #sufamilyadventures #asianparenting
25:40
August 8, 2020