By Sue Bradley
Welcome to The Kitchen Table, sit down with us and be part of conversations that will inspire you to create change for the health of us and our planet.

Life is full of the unknown, full of wonder, full of mystery. Moving into the unknown is often where we find the healing. Life needs to be savoured and celebrated.

Our uniqueness is what gives us value and meaning. Yet in the telling of stories we also learn what makes us similar, what connects us all, what helps us transcend the isolation that separates us from each other and from ourselves.

Stories are the language of community.
Listen on 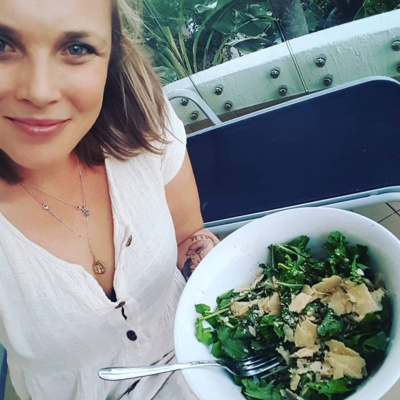 Ep 2. Lets walk wild in the forest with Sammi Zajko

Ep 2. Lets walk wild in the forest with Sammi Zajko 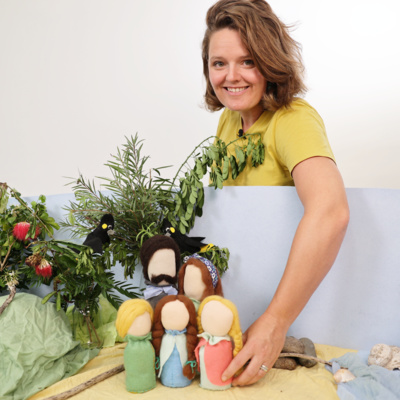 Ep 9. Mandy Dos Santos - Little People Nutrition
Mandy is a mama to 3 of her own little people. She is also a food lover, food scientist, nutritionist, educator and at heart, a kitchen mess maker. She has worked with food for over 20 years. Within food manufacturing, nutrition consultation, menu development, childcare menu development, quality assurance and control, product development, food education, community education and food writing. Mandy also runs incursions into preschools and ELCs as well as hosts food and nature playgroups and sessions. Mandy has a well-rounded and deep appreciation for the food environment and landscape in many situations and contexts. Her breadth of experience brings complexity and depth to her knowledge. You can find out more about Mandy at https://littlepeoplenutrition.com.au/ https://www.facebook.com/LittlePeopleNutrition https://www.instagram.com/littlepeoplenutrition/
01:09:51
December 13, 2021 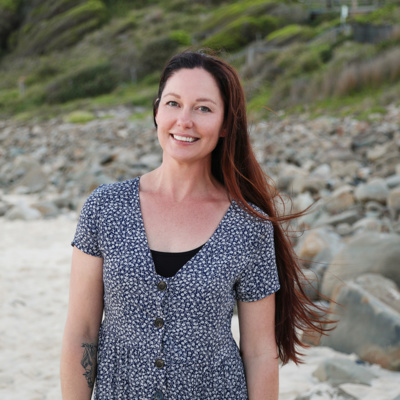 Ep 8. Shannon Cotterill - Earth, Fire, Water and Air
Shannon Cotterill is a local potter, oracle creator and witch, specialising in creating tools for divine connection through clay & fine art photography. A qualified Sister Circles Facilitator, she weaves her magic through working with the elements, rites of passage and ceremony. Her ceramics business Asha Moon was first sparked back in 2015, the name coming to her during a dream. In that dream she was asked "if you could be the most authentic version of yourself, who would you be?" and to that she replied "I am Asha Moon..." There was an idea brewing, a need to reconnect to parts of herself that she thought were long gone... and 2 years later in 2017 after much soul searching her little fledgling business was out there for the world to see.. Shannon is a professional photographer (who owned & operated 'Bloom Photography Portrait Studio' from 2002 - 2018), and an award winning fine art photographer - self publishing her first oracle deck ‘Of Earth & Ether’ in 2020. In 1997 she completed a Certificate 3 in Ceramics & Sculpture at Newcastle TAFE fresh out of high school & had big dreams of working in the field of ceramics. Life had other plans for her (3 babies in her 20's & a journey in the world of photography & business!), but it's funny how life comes full circle & she's back to where she started. Back to what makes her feel at one with the earth. Back to what makes her grounded & connected. Back to clay. Podcast - Turns out She is a Witch https://open.spotify.com/show/6hKUX9Bpnkz30iUWGSIa4z Asha Moon Website https://ashamoon.squarespace.com/ Facebook https://www.facebook.com/ashamoonceramics Instagram https://www.instagram.com/ashamoondesigns/ Shannon Cotterill Website https://shannon-cotterill.squarespace.com/ Facebook https://www.facebook.com/shannoncotterillphotographer Instagram https://www.instagram.com/shannoncotterill_photographer/
01:01:52
December 07, 2021 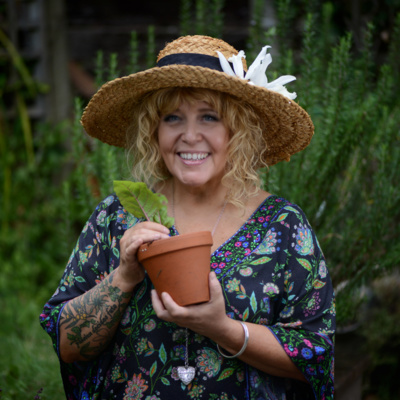 Ep 7. Cheralyn Darcey - Botanical Historian, Author & Artist
In this episode I speak with my beautiful friend, Cheralyn Darcey, she is a gardener with a passion for ethnobotany and botanical history and has written and illustrated 20 internationally published botanical titles.  She produces and presents a live weekly two-hour gardening radio show, 'At Home with the Gardening Gang', on CoastFM 963 with Pete Little and  is also the gardening columnist for weekly print and digital editions for The Coast News, The Coast Chronicle and The Pelican Post. She lives in Lake Munmorah and is the Garden Curator of SWAMP Central Coast (Sustainable Wetlands Agricultural Makers Project) - based in the middle of the NSW Central Coast, it is a working Community Garden which provides community outreach programs and community garden training. You can find Cheralyn on Coast FM 963 every Saturday morning from 8.00 am til 10.00 am with Pete Little and I guarantee you will have a laugh and enjoy all the guests that are welcomed on each week. If you would like to find out more about Cheralyn and buy any of her books please go to https://www.cheralyndarcey.com/
56:17
November 29, 2021 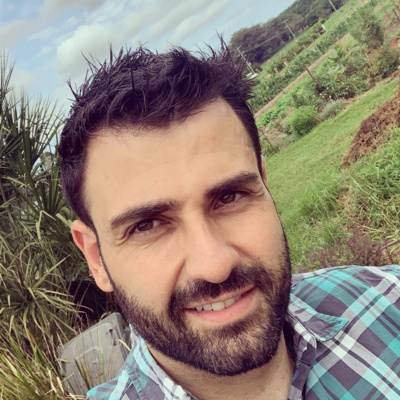 Ep 6. Regen Ray (Ray Milidoni) of Farming Secrets - Regenerative Farming and Sharing Soil Love
Soil Health Advocate Helping Heal Our Planet by Regenerating Healthy Soils at Farming Secrets an Online Education Company & Community of Soil Lovers! ‘Regen Ray’ is a soil lover and partnered with Farming Secrets to take their business into the next generation of online learning, launching the Soil Learning Center during the pandemic. He now works with mentors from around the world to create educational programs all about soil. He has been teaching people about soils for years through his online classrooms, webinars and recently launched his podcast, Secrets of the Soil. On this show, he interviews experts in their field and talks about important topics all about the soil. He wears many hats from business to marketing to operations and even crypto. His belief that everything good in life starts with healthy soil has allowed him to dig deeper and help create inspiring conversations all over the world. Listen to Regen Ray on the Secrets of the Soil Podcast. - https://www.SoilLearningCenter.com/podcast Watch Regen Ray on YouTube - https://farmingsecrets.com/youtube For more info check out our educational website at - http://farmingsecrets.com
56:42
November 22, 2021 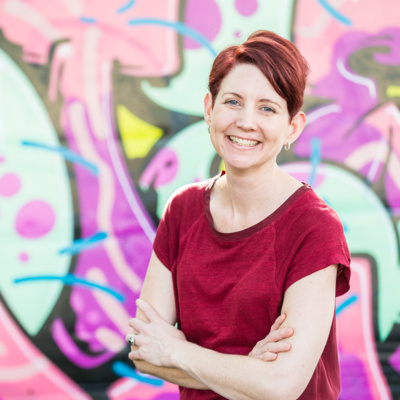 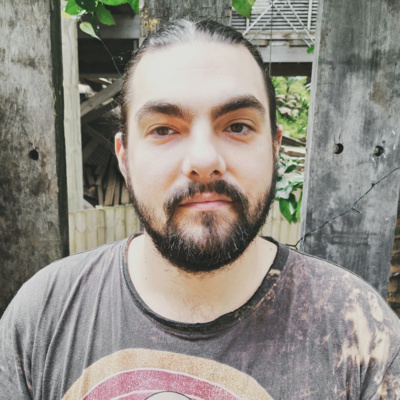 Ep 4. Ashley Reynolds - Integrative plant medicine, walking the road to recovery.
Ashley Reynolds is an addiction consultant and recovery coach who is also a knowledgeable plant-medicine enthusiast working with others via pre- and post-psychedelic integration and addiction recovery. Over his life he has overcome heavy drug addiction issues through both mainstream and alternative means- first using traditional medical recovery programs and in recent years; through a combination of ethnobotanical medicine, 12-step recovery models and his own mindfulness and meditation practices and studies. He believes that integrative plant medicine has multiple applications and consults regularly with different individuals in the space; hoping to create a place where this can be made a legal, accessible resource for those suffering from addiction issues, mental health issues and for the medical treatment of chronic illness and end of life therapy. If you want to get in touch with Ashley you can do so by contacting him via his email ashley@binarytide.org
01:02:05
April 30, 2020 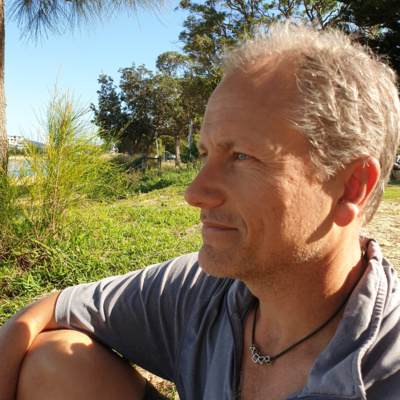 Ep 3. Matt Bradley - An opportunity like no other, life during COVID-19 and what it means for us all?
Matt Bradley is an Australian born entrepreneur. He has founded a number of businesses specialising in Industrial Automation since 2001 involved in some of the largest projects in and outside of Australia. Matt is a certified professional engineer who earned his Engineering degree at University of Technology, Sydney in 1994 Diploma in Engineering Management at Deakin University, 2001 Psychology of Eating coach in 2017. A range of specialist engineering certifications in safety and cyber security. His engineering career includes working for companies including Caltex and CSR until going it alone. Building and mentoring high performing engineering teams, and leading large scales projects for various clients and projects most notably Victorian Desalination Project in 2009 to 2012, more recently Sydney Northwest Metro (2017-2019) and Sydney North Connex (2019 -2020) projects. Hi passion / hobby for 25 years has been health in all its aspects of physical, mental, emotional, and spiritual. He has experimented with many diets, supplements, meditations, and other BIO-HACKS, and is relentless in looking for and trying out new enhancements. Being engineer he is OCD when it comes to digging into the “DATA”, sourced from many reputable avenues, creating a holistic picture of health and performance. He loves challenging  and deep discussions in relation to all aspects of life and cultural norms, a contrarian at heart, always asking “Why are we going this way?” Links to check out as suggested in the discussion: Aus Death Statistics https://www.aihw.gov.au/deaths/aihw-deaths-data European Statistics for Death Rates https://www.euromomo.eu/ https://www.euromomo.eu/graphs-and-maps/ Italian Health Site – Show distribution of deaths and comorbidities https://www.epicentro.iss.it/ https://www.epicentro.iss.it/en/coronavirus/bollettino/Infografica_22aprile%20ENG.pdf https://www.epicentro.iss.it/en/coronavirus/bollettino/Report-COVID-2019_20_april_2020.pdf US Health site https://www.cdc.gov/flu/weekly/index.htm Other reports of Interest https://www.thelancet.com/journals/laninf/article/PIIS1473-3099(20)30243-7/fulltext https://www.news.com.au/lifestyle/health/health-problems/coronavirus-australia-queensland-researchers-find-cure-want-drug-trial/news-story/93e7656da0cff4fc4d2c5e51706accb5 https://www.drbrownstein.com/85-chm-covid-patients:-zero-hospitalizations-and-no-deaths/ https://www.ncbi.nlm.nih.gov/pmc/articles/PMC1232869/
01:40:07
April 24, 2020

Ep 2. Lets walk wild in the forest with Sammi Zajko
Sammi Zajko is a wild and daring Fermentation Revivalist. She is a workshop facilitator, presenter, speaker, nutritional researcher, foodie, wild weed forager, mother and owner at Fermenting Australia. Sammi has a background in nutrition and natural health. She is based on the Central Coast and runs fermenting workshops all over NSW and QLD, as well as in Sydney and in Melbourne. Her passion is to teach and share the wonderful and fascinating world of fermented food in a way that is accessible, easy and fun. Her workshops are energetic, informative and dynamic. She has have been a guest presenter at a number of high-profile food, sustainability and health events around Australia. Sammi is also one half of The Gut Warriors- a dynamic duo who travel around the country teaching sell-out Gut Health Seminars. Sammi teaches extensively about the human microbiome, food to support gut health and of course, fermented foods. Sammi has recently completed her Diploma in Counselling, with the goal to work in a private holistic counselling practice from 2019. Sammi is also a qualified and experienced doula (birth-support), Infant Massage Instructor, Swimming teacher, Dive Master, Reiki Practitioner and Shamanic Practitioner. Sammi is a solo-mumma to her beautiful 8-year old boy, Jem. Jem’s favourite food is lacto-fermented pickles and he calls himself a “cheeky fermenter!” He is a potent reminder of the importance of fermented foods and high quality, nutrient-dense foods in the family diet for vibrant health. Jem is also her continued inspiration for living sustainably and treading softly on the Earth. She believes that we have borrowed this Earth from our children and her life and business reflects that philosophy. www.facebook.com/fermentingaustralia www.instagram.com/fermenting_australia www.thegutwarriors.com www.facebook.com/thegutwarriors www.instagram.com/thegutwarriors
59:38
February 18, 2020 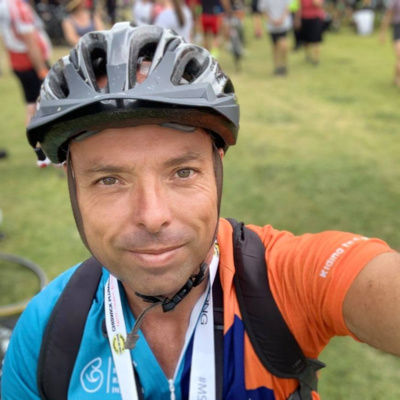 Ep.1 We can laugh, and talk, and relearn what we already know - interview with Stuart Gough
Today's guest's books back cover he’s working-on reads… Can we start over and be strangers again? Let me introduce myself... We can laugh, and talk, and relearn what we already know. Come-up with inside jokes, create new memories, by giving things another go? Would you have the courage to go back and start yourself, over? Maybe it’s not about fixing something broken. Maybe it’s about a second chance, by creating something greater… Wow! Born, bred, and living in Sydney, earlier this year I spoke with today's guest while waiting five hours for plane repairs on a flight back from the Sunshine Coast to Sydney. At 53, Stuart Gough has spent the last seven years transforming his health (as you heard in his own words) “from broken to grateful”. At age 46, Stuart figured out he’d developed osteoporosis and a bunch of other lifestyle diseases. As a self-confessed workaholic, poor dietary and lifestyle choices first showed signs of disease with a torn knee meniscus needing surgery in 2008; then years of plantar fasciitis and multiple painful heel spurs requiring pain meds and crutches. Needing more incentive to change his ways, a few years on, he ignored a thoracic spinal fracture that almost saw him paralysed in 2012. In 2013, Stuart accepted the metabolic illnesses he’d given himself, had been his gift with a lesson and a choice attached to either do something about, or spend the rest of his life medicated living in a cared facility with many other lifestyle diseases, he’s now healed. In 2016, Stuart became the first male graduate of The Functional Nutrition Academy; who he says their vitalistic philosophy “saved his life”. Now 60kg lighter (did I mention that?) Stuart has fine-tuned a wealth of ‘simple approach’ knowledge that can apply to ‘any body’ starting a healing journey, or those lost and overwhelmed with the amount of information on offer. And if we have time in today’s conversation, I’ll see if I can tug on his heartstring why so many people achieve poor results from their efforts, to share with us some missing jigsaw puzzle pieces he’s learnt from others we are better first focusing on, to help improve outcomes.
01:04:19
November 29, 2019