By Tamryn Spruill
Welcome to The Hard Screen! With a storytelling bent, The Hard Screen marries current events with historical context, emotion with fact, and drills down deep into issues of race, gender and sexuality that impact the place of women’s hoops (women’s sports more broadly and women generally) in society.
​
Follow us on Twitter and Instagram: @hardscreenpod
Check out our stories, merch and more on the web: thehardscreen.net/
We're on YouTube, too! www.youtube.com/user/TheHardScreen
Listen on Spotify
Website

S2E2: All We Needed Was The Chance
Gabby Williams spoke with The Hard Screen in January during a break between the EuroLeague Women regular and postseasons where she plays for Sopron Basket in Hungary. The forward with the WNBA's Chicago Sky spoke about her new partnership for Ford, the silliness of gendering objects like cars, advertisers' renewed interest in the league's players, the toxic culture of the NCAA and much more.  Support this podcast by becoming a Pal, Teammate or Power-Player on Patreon.
21:22
March 25, 2021

S2E1: A look into the WNBA's 25th-anniversary season with Commissioner Cathy Engelbert
Twenty-five years since its inaugural tipoff, the WNBA is still here: "impossible shot after impossible shot after impossible shot." In the runup to the historic 2021 WNBA season, the league has provided The Hard Screen with a first look into the ways the league will pay homage to the past and WNBA Commissioner Cathy Engelbert discusses how the season is an investment in the league's next 25 years. Count It sound clip is copyrighted to the WNBA and provided with permission.  Ways to support this podcast: Follow us on Twitter: @hardscreenpod Become a patron: https://www.patreon.com/thehardscreenpodcast
21:04
March 15, 2021

S1E9: The Cry for Justice Continues
On the one-year anniversary of Breonna Taylor's murder by Louisville police officers, we review the changes that have happened in the wake of her death, explain why justice still has not been served and replay an episode that originally aired on July 31, 2020 about the relentless grief inflicted on families whose loved ones have been killed by police and how that pain is compounded by impunity. WARNING: THIS EPISODE CONTAINS VIVID DESCRIPTIONS OF POLICE VIOLENCE AND MAY NOT BE SUITABLE FOR ALL LISTENERS. Ways to support this podcast: Follow us on Twitter: @hardscreenpod Become a patron: https://www.patreon.com/thehardscreenpodcast
32:13
March 13, 2021

S1E8: Girl, Bye: The Unforgivable Sins of Kelly Loeffler
Now that Atlanta Dream co-owner Kelly Loeffler has been voted out of a Senate seat she was never voted into, does this mean she returns to WNBA ownership as if nothing ever happened? Unlikely, if the players, who supported her rival, Rev. Raphael Warnock, in the race, have anything to do with it. Many of Loeffler's "sins" during the election, which Warnock won, reflect a racist ideology that runs counter to what most players in the WNBA stand for and, therefore, are unforgiveable. Get The Hard Screen merch.
20:45
January 06, 2021

S1E7: Natasha Cloud: 'We are the deciding people on who runs our country'
Ahead of the November 3rd presidential election, WNBA champion Natasha Cloud is urging all people to vote, especially Black and brown people who historically have been disenfranchised from the electoral process. In a wide-ranging interview with Tamryn Spruill, Cloud also discussed the need for police reform, the Breonna Taylor case in the context of voting, the Trump supporters in her family and why she is voting for Joe Biden.  We rely on listener support to keep this podcast going. Please consider a monthly donation to The Hard Screen.
22:23
October 27, 2020

S1E6: ELECTION SPECIAL
"Vote like your life depends on it," says Natasha Cloud, starting guard for the 2019 WNBA champion Washington Mystics. With the 2020 presidential election just two weeks away, The Hard Screen brings you an election special that includes: Interviews with Cloud and Renee Montgomery, a two-time WNBA title-winner, who opted out of the 2020 season to focus on social justice initiatives that emphasized getting polling locations into their respective communities of D.C. and Atlanta, helping voters to register and educating voters on the voting process  A breakdown of why it is so difficult for some voters in many parts of the country to cast their ballots this year A review of what individual WNBA teams have done in their respective cities to encourage voter registration and provide polling locations Subscribe to The Hard Screen Newsletter to access full written reporting on this topic.
27:07
October 20, 2020

S1 Extra: 'Literally, by her sheer size'
Layshia Clarendon discussed the ways the Pulse nightclub massacre was a galvanizing moment for LGBTQ+ acceptance and the reasons Brittney Griner's entry into the WNBA -- 'literally, by her sheer size' -- made a resounding and undeniable statement of authenticity.    Support this podcast. Purchase some merch.
10:41
October 11, 2020

S1E5: Why Black Girls Are Cheering for WNBA MVP A'ja Wilson
When the Las Vegas Aces tip off in Game 1 of the 2020 WNBA Finals, A’ja Wilson--this year’s WNBA Most Valuable Player, a two-time All-Star and the 2018 Rookie of the Year--will be playing for Black girls everywhere, especially those with apostrophes in their names. Rich or poor, tall or short, athlete or non-athlete, Black women and girls have needed something to cheer about this year and Wilson’s success provides. But fans should not underestimate the pressures and demands she faces as an elite basketball player trying to win a championship during pandemic and protest.  In late September, the league announced its decision to award the 2020 WNBA Community Assist Award to all players for their work on social justice. Wilson and Sydney Colson of the Chicago Sky, both members of the league's newly-created Social Justice Council, spoke to select media via Zoom conference about the council's work and the impact of racial injustice on their lives.  Bethany Donaphin, head of WNBA basketball operations, and Dr. Dr. Kimberlé Crenshaw, co-founder of the African-American Policy Forum and creator of the Say Her Name campaign, also spoke.   Support this podcast. Shop The Hard Screen store.
24:18
October 02, 2020

S1E4: #SayHerName (Part 2): 'Amplify the names'
TRIGGER WARNING: THIS EPISODE CONTAINS VIVID DESCRIPTIONS OF POLICE VIOLENCE AND MAY NOT BE SUITABLE FOR ALL LISTENERS. In this two-part #SayHerName special edition of The Hard Screen, mothers of daughters murdered by police speak on their shattered lives, their partnership with WNBA and demands for change.  Joining the conversation are: Dr. Kimberlé Crenshaw, co-founder and executive director of the African-American Policy Forum (AAPF) and the #SayHerName campaign and Janelle Monaé, musician, artist and activist. Featured guest: Rhanda Dormeus, mother of Korryn Gaines, who was murdered by Baltimore police in 2016. Audio from Colson, Crenshaw and Best were recorded at an AAPF virtual event attended by Tamryn Spruill and provided courtesy of AAPF. Support this podcast.
36:57
August 07, 2020

S1 Extra: Sabrina Ionescu's Quite Literal Hoop Dreams
One day after No. 1 overall 2020 WNBA Draft pick Sabrina Ionescu dropped 33 points in 34 minutes in her second professional game, Tamryn Spruill spoke with the New York Liberty guard about hoops, opportunities to grow the game and more. In this "extra" from The Hard Screen, a portion of that interview.  Support this podcast.
05:33
August 02, 2020

S1E3: #SayHerName (Part 1): 'We're living every day with amputated hearts'
TRIGGER WARNING: THIS EPISODE CONTAINS VIVID DESCRIPTIONS OF POLICE VIOLENCE AND MAY NOT BE SUITABLE FOR ALL LISTENERS. In this two-part #SayHerName special edition of The Hard Screen, mothers of daughters murdered by police speak on their shattered lives, their partnership with WNBA and demands for change. Joining the conversation are: Sydney Colson, Chicago Sky guard and WNBA Social Justice Council member; Dr. Kimberlé Crenshaw, co-founder and executive director of the African-American Policy Forum (AAPF) and the #SayHerName campaign; and Bethany Donaphin, head of WNBA basketball operations. Featured guest: Gina Best, mother of India Kager, who was murdered by Virginia Beach police in 2015. Audio from Colson, Crenshaw and Best were recorded at an AAPF virtual event attended by Tamryn Spruill and provided courtesy of AAPF.  Support this podcast.
29:46
July 31, 2020 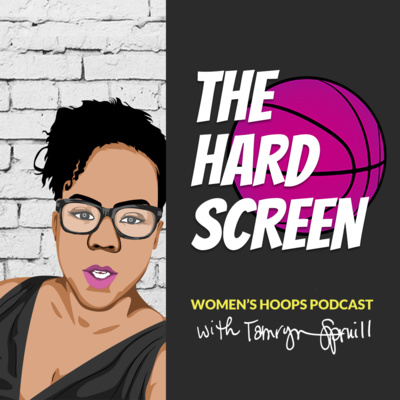 S1E2: Because Dr. King's 'I Have a Dream' Speech Tells Me So
Atlanta Dream co-owner and U.S. Senator Kelly Loeffler opposes the WNBA's and the Atlanta Dream's support for Black Lives Matter. Players and the WNBPA have called for her to sell her ownership stake in the team. WNBA commissioner Cathy Engelbert has stated that she will not force Loeffler out as owner, yet maintains support for the players' desire and decision to use the 2020 season as a platform for social justice advocacy. The Hard Screen digs into the founding principles of the Atlanta Dream and how Loeffler's politics jibe with neither the team's nor Dr. Rev. Martin Luther King, Jr.'s DREAM.  Featuring: Angel McCoughtry, WNBA star and former face of the Atlanta Dream franchise, who weighs in on the rich Civil Rights history the team’s name represents. She also discusses her happiness to be back on the court after missing much of the 2019 season due to injury and the importance of using the 2020 season to advocate for racial justice. Full written reporting on which this episode is based can be found in The Hard Screen Newsletter. Support this podcast.
25:25
July 21, 2020

S1E1: Why America Doesn't Deserve Sports Right Now
Many fans, pundits, media organization, leagues, teams and so forth have pushed the idea that sports (entertainment, fun, pastime) should be separate from society (the system in which we collectively live). By doing so, they also are falsely implying that sports and society have been separate entities historically and that athletes have never used their platforms to spur civic change. In this episode of  The Hard Screen podcast, we examine the reasons African-American athletes have used the biggest stages in sport as an opportunity to cry for freedom before the world after their cries for an end to racial injustice, police brutality, inequality and discrimination were ignored by White America when they were screamed repeatedly on on domestic soil. We illustrate America does not deserve sports right now.  Support this podcast.
27:34
June 13, 2020

Welcome to The Hard Screen!
Welcome to The Hard Screen: a podcast about women’s hoops -- a brick wall between the sport you love and the misogynistic nonsense that surrounds it. ​ With a storytelling bent, The Hard Screen marries current events with historical context, emotion with fact, and drills down deep into issues of race, gender and sexuality that impact the place of women’s hoops -- therefore, women’s sports more broadly and, alas, women -- in society. ​ At 20 to 30 minutes per episode, we won’t waste your time, but there’s nothing stopping you from listening to an episode a second or third time if you wish. ​To get episodes delivered right to your email inbox, sign up for our newsletter at thehardscreen.net. ​Follow us on Twitter @hardscreenpod to stay in the know. ​Now, let’s roll!
01:30
May 12, 2020