By Girish Jayaraman and Gaurav Nemade
Curious about people who lead unconventional lives and careers? So are we.

The Unconventional Podcast brings you insightful conversations with folks who dared to embark on the road less travelled. We learn more about their triumphs, regrets, and dreams – and why they set out into the unknown when it could have been easier not to.

We hope their tales take you one step closer to embarking on your own unconventional journey. Brought to you by Gaurav and Girish, two hosts conventional enough to want to bring these unconventional stories to life.
Listen on 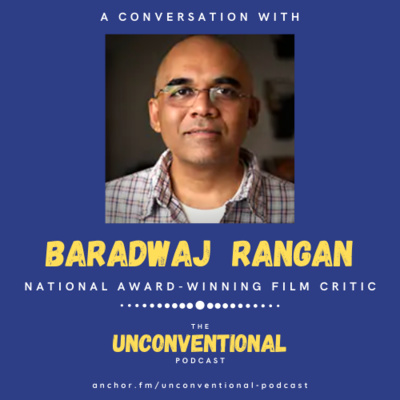 Episode #6: Baradwaj Rangan, Award-winning Film Critic
We're beyond excited to bring you this episode with Baradwaj Rangan, an award-winning film critic. Baradwaj is an Editor at Film Companion, an online platform for entertainment journalism; prior to this, he was with The Hindu and The New Indian Express. He won the National Award for Best Film Critic in 2005, and is the author of 2 books, including the evergreen Conversations with Mani Ratnam, as well as several screenplays. But that's not where his story starts: Baradwaj graduated with an engineering degree from BITS, Pilani, and spent some of his early days as an IT Consultant. He was an early influencer on the internet – his blog has long been a popular destination for fans of cinema, and it was here that he first sharpened and honed his critiques. In this freewheeling conversation, we talk about Baradwaj's hard pivot from a traditional engineering career to one in the arts, his difficult conversations with loved ones who said film writing couldn't be a real job, and his willingness to adapt to changing times, as film journalism transitions from a print medium to one that's more visual, almost entirely on Youtube. Show Notes We refer to many of Baradwaj's 'greatest hits' as a writer. Here are links to some highly recommended reads: Man of Steel, a profile of the star Vikram's unlikely climb to fame: https://baradwajrangan.wordpress.com/2013/12/05/man-of-steel/ Thamrai: An Interview with a firebrand Tamil poet: https://baradwajrangan.wordpress.com/2010/02/25/interview-thamarai/ Bombay Jayashri: An Interview with a powerful classical musician: https://baradwajrangan.wordpress.com/2006/09/17/interview-bombay-jayashri/ Inception: A Review, for an example of how good film criticism can deepen your understanding of a film and fillmmaker, even if you don't agree with it: https://baradwajrangan.wordpress.com/2010/07/24/between-reviews-dreams-of-prose/ Conversations with Mani Ratnam, Baradwaj's book on the master Indian filmmaker: https://www.goodreads.com/book/show/16079360-conversations-with-mani-ratnam Baradwaj's Book Recommendation: The Conversations by Michael Ondaatje (https://www.goodreads.com/book/show/5949.The_Conversations). "The Conversations is a treasure, essential for any lover or student of film, and a rare, intimate glimpse into the worlds of two accomplished artists who share a great passion for film and storytelling, and whose knowledge and love of the crafts of writing and film shine through."
37:03
July 28, 2021 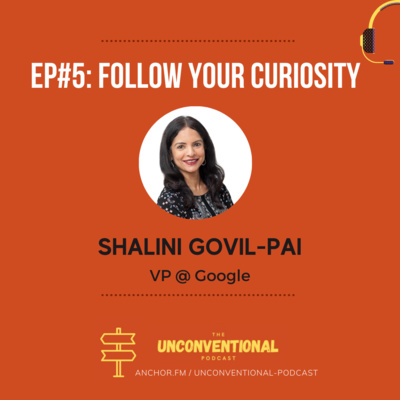 Episode #5: Follow Your Curiosity (Shalini Govil-Pai, VP @ Google)
Shalini GovilPai is the VP and GM of TV Platforms at Google overseeing product, design and engineering teams for Android TV OS and Google TV. Prior to Google, Shalini was Technical Director at Pixar Animation, where she led efforts for some of the first computer animated blockbusters such as ‘Toy Story’ and  ‘A Bug’s Life’. She has a BS and MS in Computer Science, and conferred Distinguished Alumni from her alma mater, IIT. In her career, Shalini has worked as an engineer, a product manager, an operations expert, an evangelist for YouTube creators, and also a  Bollywood performer. In this conversation, we dig deeper into why she has taken an unconventional path and what factors have contributed to her success. Links from the show: Shalini's book recommendation: https://tinyurl.com/2mk2jrjk Girish's book recommendation: https://tinyurl.com/8k9mx6t4 Gaurav's book recommendation: https://tinyurl.com/yzyjzjpf (also a mandatory read at Facebook)
35:42
May 12, 2021 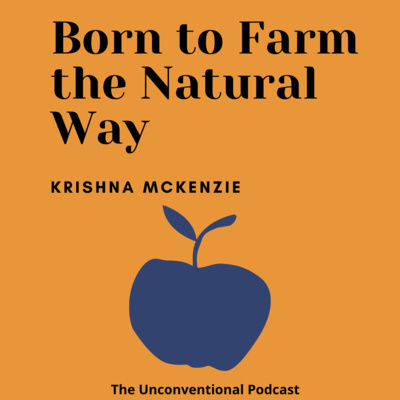 Episode #4: Born to Farm the Natural Way (Krishna McKenzie, Founder of Solitude Farms)
Krishna McKenzie is a farmer, musician, and educator. He was born and raised in England, and moved to Auroville (near Pondicherry, India) at the age of 19. Krishna is the founder of Solitude Farms, which strictly adheres to natural farming practices: no tractors, no pesticides, no fertilizers, not even de-weeding. He is an energetic promoter of Masanobu Fukuoka's principles and permaculture practices, traveling extensively across India to teach and spread the word about them. Krishna is also passionate about music, and is the front-man of the band Emergence. Here are some links to learn more about the topics in this episode: Krishna on Youtube: https://www.youtube.com/c/KrishnaMckenzie/ Emergence (the band): https://soundcloud.com/emergencemusic  Solitude Farms: https://solitude.farm/ , Auroville: https://auroville.org/ Masanobu Fukuoka: https://en.wikipedia.org/wiki/Masanobu_Fukuoka Permaculture: https://permacultureprinciples.com/ Krishna's book recommendations:  - One Straw Revolution (https://www.goodreads.com/book/show/976905.The_One_Straw_Revolution) - Jiddu Krishnamurti's Commentaries on Living (https://www.goodreads.com/book/show/355276.Commentaries_on_Living)
34:20
April 26, 2021 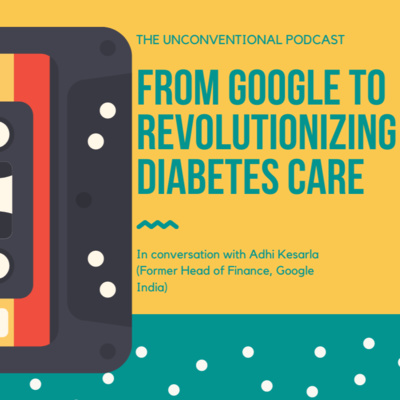 Episode #3: From Google Executive to Revolutionizing Diabetes Care (Adhi Kesarla, Founder or Sensai Healthcare)
Adhi Kesarla is a co-founder of Sensai Healthcare, which aims to redefine the future of diabetes care and its complications. Prior to this role, Adhi spent a decade at Google in multiple roles, including Head of Finance for Google India. He is a CFA Charter-holder and received his MBA from Ross School of Business, Michigan. Adhi left the leadership position at Google India to start his own healthcare startup, after 25 years of corporate career. In this episode, we dig into what prompted this dramatic shift, how did he make difficult choices, and how did he balance family responsibilities along the way.
32:04
March 3, 2021

Episode #2: Unlocking Potential from New York to Bihar, India (Zubin Sharma, Founder of Project Potential)
Zubin Sharma is originally from New York, but has lived in Bihar (India) for the last 8 years, where he founded 2 non-profits: Project Potential and Seekho.  Project Potential catalyzes rural communities to solve their own problems inclusively and sustainably, and has been funded by Mr. Narayana Murthy, Mr. SD Shibulal, Infosys Foundation, Ashraya Hastha Trust, Book a Smile, and others. Zubin has done his BA and MS from the University of Pennsylvania, where he was awarded the prestigious Non-profit Leadership Award, a full tuition sponsorship which is only awarded to one incoming student based on merit. He has also been an Acumen Fellow, UPenn Center for Social Impact Strategy Fellow, N/Core Incubatee, a Dasra Social Impact Leadership Program Fellow, and a TEDx speaker. This is a wide-ranging conversation, and we dove into how Zubin ended up in Bihar from New York as a college student, why it’s sometimes easier to start a difficult journey before you know how hard it is, and his many adventures along the way.
46:20
January 23, 2021

Episode #1: From IIT to Inspiring Social Entrepreneurs, One Train Trip at a Time (Ashutosh Kumar, CEO Jagriti Yatra)
Ashutosh Kumar is the CEO of Jagriti Yatra, a social enterprise that aims to inspire, innovate and incubate enterprises for nation-building. Every year, the organization rents out an Indian Railways train and takes 500 youngsters on a 15-day, 8000km journey to meet and learn from the best social organizations across India. Ashutosh was the founding CEO of Jagriti Yatra. In this conversation, we learn how he went from being an engineer undergraduate at IIT Kharagpur to running a train every year.
44:45
December 28, 2020