By Anna Pepe
On this podcast we discuss how to strengthen our mindset and habitual thought patterns, to help us connect more to our soul-self and take back our power so that we're truly in control of our lives and our destiny.

To practice your perspective simply means to choose which place where you are thinking, responding or even acting from -
your physical, trained brain and ego, that serves as our surviving mechanism - or your Higher Self, that is pure, unconditional love.

We're breaking free from society's negative expectations and creating lives we're excited to wake up to every morning.
Listen on Spotify
Website

Can You Jinx Yourself When Manifesting?
A lot of times people will have misconceptions about what they should be talking about, what they shouldn’t be talking about when they’re trying to manifest something, & often they’ll have misconceptions about what a jinx actually is and what actually gets in the way of the Manifestation. So we’re going to cover all of that in this podcast episode! I talk about not only what actually messes up your manifestations but also give insights as to how you can properly manifest and call in what you want.
18:10
October 26, 2020

How I Overcame My Limiting Beliefs to Manifest Money and Success
In this episode, I share actionable steps on how to overcome your limiting beliefs, and how to manifest money and success. Reframing our mind and our bodies to align with the reality we are creating is so key and crucial to be able to manifest what you want. Dissolving your beliefs that limit you from all possibilities is part of your duty as a quantum creator, as a leader in your life, to show up with responsibility for not only yourself, but for others. The more you allow your limiting beliefs to linger, not only is that more time where you are not manifesting what you want into the physical, but you are also then spreading that limiting belief to others, either with your words, thoughts, energy, or all of the above. You have a duty, a responsibility as a leader in this world, to break through your limiting beliefs, and to live as an example of the infinite potential this planet has to offer.  I also share with you the importance of not leaving voids when you dissolve things from your system, but instead replacing what you've dissolved and removed from your system with energies and frequencies that match that which you're manifesting - replacing limiting beliefs with unconditional love for Self and for all living beings, with the frequencies of the abundance codes and of having abundance, with joy, happiness, excitement, laughter, peace, ---- the list goes on as to how many beautiful and delicious energies you may want to call in to replace that belief that was limiting you from your fullest potential.
30:22
October 16, 2020

The Self-Love Badge
In this episode, I talk about what it truly means to love yourself, how loving yourself is part of staying in alignment, and both fallacy and the truth in the statement "You have to truly love yourself before anyone can love you." I give actionable tips as to how you can show up for yourself daily with love and how to create an internal environment of acceptance and peace.
14:26
October 14, 2020

Getting In The Flow State
In this episode, I talk about how getting in the flow state & being in a state of awareness most often allows me to channel & more. I share many ways you may enjoy getting into the flow state, & tips to recognize the difference between your true self, your soul self, VS. your ego.
22:05
October 08, 2020 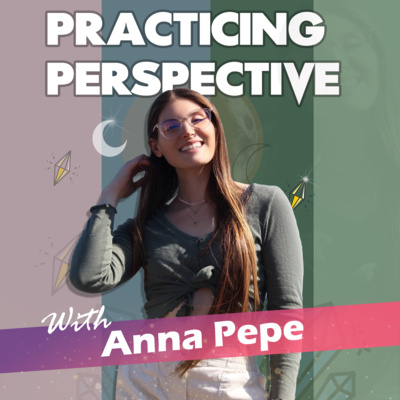 Raise Your Vibration By Detaching From These 4 Perspectives
What is practicing perspective? What does it even mean to “practice your perspective”?? Practicing Perspective is a podcast where we discuss how to strengthen our mindset and habitual thought patterns, to help us connect more to our soul-self, to help us stay in alignment and feeling fly & fine, all the time. To practice your perspective simply means to choose which place where you are thinking, responding or even acting from - your physical, trained brain and ego, that serves as our surviving mechanism -  or, your Higher Self or your soul-self, that is pure, unconditional love. We NEED to constantly be practicing our perspective and asking ourselves, “where is this thought coming from?” “ - am I responding this way because it’s what feels right and it’s what’s in alignment with myself? Or am I responding this way because that’s what I’ve always done, and have been programmed to do?” Practicing my own perspective daily has shifted SO MANY limiting beliefs I had about love, body image, friendships, romantic relationships, money, and more. In this podcast I share with you the tools I use to align my perspective with that of my Higher Self’s… as well as bringing on teachers and mentors who have and continue to inspire and help me along my journey. I want the best for you, love. On the Practicing Perspective Podcast I'll only be sharing the things that have truly helped me, and that have transformed my life in positive ways I never even imagined - even in my wildest dreams. This is a No B.S. and No Fluff Zone. Thank you for listening!
25:41
May 15, 2020