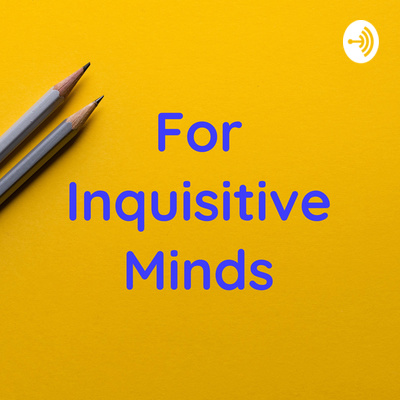 By Ali Jiwani
FIM or For Inquisitive Minds is a podcast interviewing top researchers, PhD students and other academics on their cutting edge research. We break down each topic so it is easy for anyone to pick up, and then build up the knowledge base so everyone can understand the respective theses and purposes of each interview. Topics covered include human rights, machine learning, cancer research, health informatics, energy storage, quantum computing and more!

14 Understanding customer satisfaction
Organisations which sell services or products to mass audiences struggle to understand the reasons why their customers are happy, and especially how the preferences evolve over time. The problem of understanding reasons for customer satisfaction over time stems from methodological difficulty in analysing written customer reviews as time series data. This project trials use of sentiment analysis to understand evolution of feedback over time. Sentiment models trained using Recurrent Neural Network, Naive Bayes and Maximum Entropy are compared and the best model is selected to predict feedback in the future. Difference in predictive accuracy over time is assessed for the selected model. Moreover, visuals are developed to depict how text features and themes vary in importance when it comes to accurate prediction of satisfaction over time. The objective is to enable real-time visualization and understanding of patterns in customer feedback over time from big text corpora
43:03
October 24, 2019

13 Human rights as sources of national and international criminal law
Mattio argues that in the last few years laws have increasingly become a preferred and often unquestioned means of attempting to enforce human rights. The use of human rights to mandate expanded penalty (intended as the entire “penal field”, including its laws, sanctions, institutions, practices, discourses, and representations) is mostly to be seen in the recent developments of international criminal law and transitional justice, but the phenomenon is also emerging within domestic criminal law (Teitel 2003; Tulken 2011). This paradigmatic shift raises several questions and needs to be examined further. Through the case-study of human trafficking and sexual violence and drawing on discourse analysis and socio-legal theory, the project will investigate legal and discursive practices of domestic and international tribunals, NGOs and policy-makers in order to understand how and why they are increasingly justifying the application of criminal measures by reference to human rights, and what the effects of this tendency might be.
38:53
October 10, 2019

12 Liquid biopsy and characterising tumour molecular features from blood
Prostate cancer is a very heterogeneous disease with variable molecular phenotypes and clinical outcomes. The challenges and clinical unmet needs are to understand how the tumor evolves and effectively track the disease change along the treatment. Circulating cell-free DNA (ccfDNA) in plasma is fragmented DNA present in our circulation and analysis of plasma DNA occurs as an emerging clinical opportunity to enable us to trace tumor changes, and identify signatures associated with the outcomes. While most current plasma DNA analyses focus on genomic aberrations, DNA methylation is shown to be a stable, easily-quantifiable biomarker that is tissue-specific. My project is to profile methylome from low-input ccfDNA in plasma and our initial data indicates DNA methylation signatures extracted from plasma DNA could accurately estimates tumor fraction changes before and after treatments such as AR-targeting agent abiraterone or docetaxel. For Inquisitive Minds is a fortnightly podcast showcasing post graduate work in all areas. The podcast seeks to identify ground breaking research and bring it to the masses. Visit patreon.com/forinquisitiveminds to learn more about our work!
01:20:07
September 26, 2019

10 Exploring the perceptions of patient safety in the NHS ambulance services
Keegan explores ambulance settings are incredibly under-researched when compared to that of hospitals and primary care settings, and so it's very exploratory and aiming to capture perceptions of staff in regards to how they view patient safety in general, the reporting of incidents, organisational culture, etc.  For Inquisitive Minds is a fortnightly podcast showcasing post graduate work in all areas. The podcast seeks to identify ground breaking research and bring it to the masses. Visit patreon.com/forinquisitiveminds to learn more about our work!
34:23
August 29, 2019

09: Simulating our universe using machine learning with Davide Piras
Davide is a PhD student at University College London, studying how machine learning could be applied to replicate simulations of our Universe. His main research thus focus on Astrophysics and generative algorithms, even though he published a paper on intrinsic alignment a couple of years ago. To learn more about him, you can visit his LinkedIn profile, or you can directly tell him why you disagree with his views by dropping him a few lines at d.piras@ucl.ac.uk. For Inquisitive Minds is a fortnightly podcast showcasing post graduate work in all areas. The podcast seeks to identify ground breaking research and bring it to the masses. Visit patreon.com/forinquisitiveminds to learn more about our work!
35:51
August 01, 2019

08: An eco-friendly solution to help prevent Schistosomiasis with Rhianna Williams
Rhianna works at Imperial College London, raising funds for research within Medicine and Sciences. She also conducts research into Neglected Tropical Diseases, such as Schistosomiasis. This study examines ecological theory and sustainable intervention methods, using the Senegal River in Uganda as a lens. You can reach her via LinkedIn; https://www.linkedin.com/in/rhianna-patricia-williams/  For Inquisitive Minds is a fortnightly podcast showcasing post graduate work in all areas. The podcast seeks to identify ground breaking research and bring it to the masses. Visit patreon.com/forinquisitiveminds to learn more about our work!
33:44
July 18, 2019

07: The Benefits of Autophagy with Gautam Runwal
Gautam has completed his PhD from the University of Cambridge and will be moving to UCSF as a postdoctoral scholar. His current research interests encompass studying the human brain in context of neurological disorders using various cellular and molecular biology techniques. For more information related to autophagy and his contributions to the field, please visit the laboratory website of his PhD supervisor, Prof. David Rubinsztein ( https://www.cimr.cam.ac.uk/research/principal-investigators/principal-investigators-q-z/Rubinsztein). For Inquisitive Minds is a fortnightly podcast showcasing post graduate work in all areas. The podcast seeks to identify ground breaking research and bring it to the masses. Visit patreon.com/forinquisitiveminds to learn more about our work!
33:41
July 04, 2019

06: Optimal Solutions in 5G using Coding Theory with Rafah El-Khatib
Rafah did her PhD in Coding Theory at EPFL, Switzerland and is now a data scientist at ING in London. Her research focused on the analysis of an optimisation algorithm, called belief propagation, that is used in telecommunications and machine learning, among other fields, using notions from functional analysis. Her conference and journal papers can be found here: https://arxiv.org/search/?searchtype=author&query=El-Khatib%2C+R For Inquisitive Minds is a fortnightly podcast showcasing post graduate work in all areas. The podcast seeks to identify ground breaking research and bring it to the masses. Visit patreon.com/forinquisitiveminds to learn more about our work!
38:11
June 20, 2019

05: Using Machine Learning to test drug responses with Will Bowers
Will Bowers is a PhD researcher at the institute of Cancer Research. He is focusing on defining biomarkers of tyrosine kinase inhibitor response in soft tissue sarcoma. To break that down, soft tissue sarcoma (STS) is a rare cancer category (
39:56
June 06, 2019

04: Why don't pancreatic cancer cells die? Ask Caroline Haegeman
Caroline is a PhD student at Imperial College studying pancreatic cancer. Her research focuses on understanding the mechanisms of resistance to cell death in cancer and novel therapeutic approaches to tackle this. To do this Caroline uses techniques such as CRISPR-Cas9 screens, bioinformatics and in vitro studies. For more information or to get in touch connect with Caroline on LinkedIn.  For Inquisitive Minds is a fortnightly podcast showcasing post graduate work in all areas. The podcast seeks to identify ground breaking research and bring it to the masses.  Visit patreon.com/forinquisitiveminds to learn more about our work!
40:08
May 22, 2019

03: Energy Storage with Oliver Schmidt
Oliver Schmidt has a PhD researcher at Imperial College in Energy storage. He is looking at the Future cost of electricity storage and its value in low-carbon energy systems. He analyses future cost reduction potentials using experience curves, expert interviews, bottom-up engineering models and look at market and system value using energy system models. You can find more details on his website www.storage-lab.com. For Inquisitive Minds is a fortnightly podcast showcasing post graduate work in all areas. The podcast seeks to identify ground breaking research and bring it to the masses.  Visit patreon.com/forinquisitiveminds to learn more about our work!
41:47
May 10, 2019

02: A Discussion on Intergroup Conflict and Aggression/Social Psychology with Dorottya Lantos, PhD Candidate
For Inquisitive Minds is a fortnightly podcast showcasing post graduate work in all areas. The podcast seeks to identify ground breaking research and bring it to the masses. On this podcast we chat about many areas of social psychology. Why groups work together, why conflict starts, and why we are currently getting so decisive.  We finish with an interesting group exercise that you can take on or try it along with us. This was one of the most exciting conversations we have had so far! Dorottya is a Ph.D. Candidate in Psychology and an Associate Lecturer at Goldsmiths, University of London. Her research focuses on intergroup conflict and aggression, and on identifying ways in which we can prevent or reduce such conflict and aggression. She uses psychological as well as neuro-scientific methods to tackle her research questions. To find out more about collective narcissism, the topic she discusses in this episode of the podcast, read her recent review article published in Advances in Political Psychology: https://onlinelibrary.wiley.com/doi/full/10.1111/pops.12569 Visit patreon.com/forinquisitiveminds to learn more about our work!
52:45
April 25, 2019

01: Quantum Computing with Pavlos Apostolidis, PhD
For Inquisitive Minds is a fortnightly podcast showcasing post graduate work in all areas. The podcast seeks to identify ground breaking research and bring it to the masses.  Pavlos Apostolidis obtained his PhD in Quantum Physics at University College London in 2018. His research focused on advances in the field of solid-state quantum computation, and it was conducted at the London Centre for Nanotechnology. In his work he used custom-made nanodevices, cooled at ultra-low temperatures, to investigate quantum state readout using high-frequency measurements. To learn more about his work, please visit ucl.ac.uk/quantum-devices. Visit patreon.com/forinquisitiveminds to learn more about our work!
35:21
April 10, 2019

The Introduction
Introducing FIM - For Inquisitive Minds. Check it out and learn about what we are working on!
03:01
March 10, 2019