The purpose of the Thip Khao Talk Podcast is to open up more dialogue and spaces for discussion about topics and issues that greatly impact communities due to the aftermath of the Secret War in Laos. This includes the ongoing UXO issues and other war legacies that still impact people today. We highlight and amplify individual communities impacted by the aftermath and remnants left in Southeast Asia.

EP 005: Trailblazing Research in Cambodia with Dr. Erin Lin
This Thip Khao Talk, we had the pleasure of speaking with Dr. Erin Lin. Dr. Erin Lin is an Assistant Professor of Political Science and Global Food Politics at the Ohio State University and a member of the MAG America Board. Her research interests lie in the areas of post-conflict reconstruction, political geography, food security, and legacies of war, with a regional focus on Southeast Asia. Get ready to go back to school with us for this special episode as we dive into discussing Erin’s research on the long-term effects of UXO and other explosive remnants of war on the environment and agriculture in Cambodia. Don't forget to check out Erin's recent published article, How War Changes Land: Soil Fertility, Unexploded Bombs, and the Underdevelopment of Cambodia
23:55
September 01, 2022

EP 004: Leading a Movement Toward a Zero-Waste Laos
This Thip Khao Talk, we had the pleasure of speaking with Souksaveuy Keotiamchanh, founder of Zero Waste Laos based out of Vientiane. Zero Waste Laos, an organization founded in 2019 and pursuing non-profit status, began as a Facebook group to increase awareness about waste management and has since evolved to appoint and train youth to be “Sustainability Leaders”, increase awareness of environmental issues and pragmatic solutions, and advocate for banning single-use plastics and trash burning. The organization recruits volunteers, trains youth ambassadors, and works with community partners to spread awareness about waste management and “green” practices, and engages various Laos sectors in the fight against climate change. Open burning of trash has been recognized as a very common way for people to get rid of their waste in Laos. Over the years it has also proven to be a very dangerous and risky method for disposing of waste, especially in areas that are heavily contaminated with unexploded ordnance. Zero Waste Laos’ goals include becoming a non-profit, establishing “role model schools” across Laos, encouraging youth to solve environmental issues through providing environmental education on waste separation, composition, and burning, and campaigning for a bottom-up approach to ban single-use plastic and stop trash burning.
16:47
July 14, 2022

EP 003: Matriarchs in May
As we celebrated Mother’s Day and continue to celebrate Asian Pacific American Heritage month, in today’s Thip Khao Talk, we are reflecting on the stories of matriarchs in the Laotian community. In this special episode, we are joined by our Chief of Staff, Aleena Inthaly’s Mother Vienxay Inthaly as she opens up about the past and shares her hopes for the future. During this talk, we also hear from another matriarch and past Thip Khao Talk special guest, Pa Bounthanh Phommasathit who serves as the inspiring voice that brings together generations and provides comfort to other mothers in the community to open up and amplify their voices too. Join us for this emotional episode, as we listen to the stories of Lao Americans and how reslience, love, and loss can help us build a brighter future for generations to come. Bios of the moms: Bounthanh Phommasathit is a bombing survivor, a former refugee originating from Laos, and a community-minded entrepreneur. Her past experiences continue to resonate with her and have driven her to become the woman she is today. She earned a B.A. in social work from Capital University and received a Master of Human Services Management from Franklin University in Columbus, Ohio. Vienxay Inthaly is a known as a Lao dessert extraordinaire, community aunty for all, and serves on the Board of Directors of the newly formed Jai Dee Organization of Virginia. She remains one of Legacies of War’s longest serving volunteers and community caterers and has shared that one of the best ways she continues to serve the community is through cooking and sharing her love of food with the neighborhood.
27:54
May 10, 2022

EP 002: Legacies Moments Captured in Photos with Elaine Russell
Prior to our recording, Elaine Russell, Author and former member of Legacies of War’s Board of Directors sat down with us to uncover an archive of over 3,000 photos captured from the very first trips with Legacies. This Thip Khao, we will be flipping through the various photos of the special faces and places we will always remember as part of our mission’s tapestry of hope. Elaine first traveled to Laos in 2006 to research her novel, Across the Mekong River, the story of a Hmong family fleeing Laos after the Vietnam War-era civil war. On this trip she learned about the terrible tragedy of unexploded ordnance (UXO), remaining from U.S. bombing campaigns in Laos during the Vietnam War. On returning home, Elaine connected Legacies of War. She volunteered with the group, assisting at many Legacies’ events around the U.S., and serving on the Legacies’ Board of Directors for five years. She traveled with the organization to Laos in 2008 and 2010, and remains an ardent supporter of the groups important mission. Elaine has written two essays on the civil war in Laos and its aftermath. The first essay, “Legacies of War: Cluster Bombs in Laos,” was coauthored with Channapha Khamvongsa, previously Director of Legacies of War. The article was first published in the Critical Asian Studies Journal in June of 2009. It has since been updated to reflect current information on the situation and the progress made in UXO clearance in Laos. This article is included in the book: The United States, Southeast Asia, and Historical Memory, Edited by Mark Pavlick with Caroline Luft. Chicago, Illinois, Haymarket Books, June 2019. Elaine also wrote the essay, “Living with Unexploded Ordnance: Past Memories and Present Realities in Laos,” published in the book: Interactions with a Violent Past: Reading Post-Conflict Landscapes in Cambodia, Laos, and Vietnam. Edited by Vatthana Pholsena & Oliver Tappe. Singapore: NUS Press, 2013.
18:18
April 01, 2022

EP 001: A Moment in Herstory with Linda Gehman Peachey
In this episode, retrace the steps of Linda Gehman Peachey, Former Co-Director Peace and Justice Ministries of the Mennonite Central Committee in Laos, as she shares her story. -- Linda Gehman Peachey is a freelance writer living in Lancaster, Pennsylvania.  Previously, Linda worked for Mennonite Central Committee (MCC) on women’s concerns and also served with her husband, Titus, as co-director of Peace and Justice Ministries. From 1980-1985, they also worked in Laos with MCC, with humanitarian assistance focused on post-war recovery. She and Titus have two adult daughters and enjoy visiting them in Chicago and Guatemala.
17:52
March 08, 2022 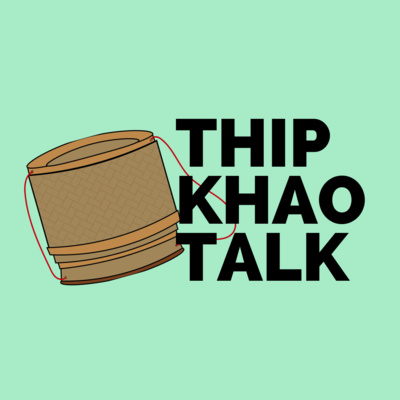 THIP KHAO TALK TRAILER 2022 Amplifying New Voices
Tune in to our very first podcast: Thip Khao Talk! We’re launching our first episode on March 8th with stories and conversations History, Healing, Hope.   🎧 Through these talks, we bring greater awareness to UXO and other war legacies issues as well as individuals and communities impacted by the aftermath and remnants left from the Secret War. 🎧 We’re Amplifying New Voices and hope that you’ll join us in passing of the mic 🎤
01:25
February 10, 2022