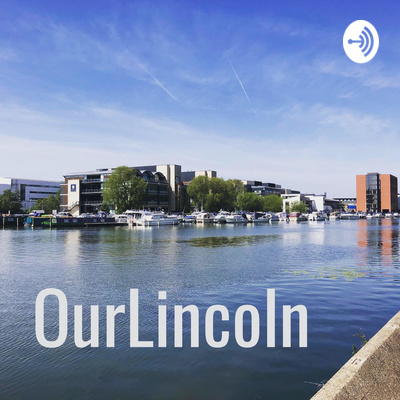 By Marc Rhodes
OurLincoln brings you interviews with Lincoln’s entreprenuers and professionals as they share their career journey, their vision for Lincoln’s future and why they love living and working our city.

Hosted by Lincoln based owner of MR7 Marketing, Marc Rhodes and recorded in The Tank Room at The White Hart Hotel, OurLincoln shares varied and inspirational stories from friends and colleagues around the city.

We'll also hear about what they enjoy outside of work, their favourite places, restaurants and events in Lincoln, and more!
Listen on
Website

Nikki Cooke, LIVES
In this week's episode Marc Rhodes speaks to CEO of Lincolnshire's first responders charity, LIVES, Nikki Cooke.  Nikki talks about LIVES incredible work saving lives across the county, the challenges associated with running the charity and plans for their 50th anniversary this year. Nikki also shares details of LIVES other community projects, her career journey and why she loves living and working in Lincoln and Lincolnshire.
27:36
February 20, 2020

// Steff Wright, Gusto Group //
Marc Rhodes speaks to Steff Wright, CEO of Gusto Group, about his career journey, building the homes of the future, his new venture ‘Global Grad’ and why he loves living and working in Lincoln.
47:28
January 30, 2020

General Election Special: Karl McCartney, Conservatives & Karen Lee, Labour
Marc Rhodes speaks to Lincoln's Conservative and Labour Party candidates ahead of the General Election on December 12th 2019. Karl McCartney and Karen Lee discuss what inspired them to get into politics, their career journeys and the key issues around the general election including; Brexit, the NHS, policing, the environment, education and social issues. The candidates also discuss the current political climate and why they love living and working in Lincoln and Lincolnshire. This episode is sponsored by CityX, MR7 Marketing & The White Hart Hotel.
1:54:01
December 5, 2019

Ryan Lovett, Clean Lincoln Everywhere And Now
Marc Rhodes speaks to Ryan Lovett, founder of Clean Lincoln Everywhere and Now, about the idea and inspiration behind his community litter picking project that aims to give the people of Lincoln ownership of keeping their public spaces clean and tidy. Ryan also talks about his plans to expand the project and why he loves living and working in Lincoln.  This episode is sponsored by CityX, MR7 Marketing, Visit Lincoln, Stokes Tea & Coffee and The White Hart Hotel.
33:31
November 27, 2019

// Danny Gill, Brown’s Pie Shop //
Marc Rhodes speaks to Danny Gill, Chef Proprietor at Brown’s Pie Shop in Lincoln. Danny talks about his career journey, who and what inspires him as a chef and his plans for Brown’s. Danny also talks about engaging with the community, encouraging young people to join the hospitality industry and why he loves living and working in Lincoln.
39:18
November 21, 2019

// Emily Cartwright, Cultivate //
Marc Rhodes is joined by Emily Cartwright, owner of one the newest additions to Lincoln’s city centre, Cultivate. Cultivate is a new community wellness space that serves a range of herbal teas and coffee and vegan cakes, as well as providing space for local artists, yoga practitioners and more. Emily talks about her career journey, studying herbal medicine, starting her business and why Lincoln is a great place to live and work. This episode is sponsored by CityX, Visit Lincoln, Stokes Tea & Coffee and The White Hart Hotel.
34:41
November 14, 2019

// Rachel Linstead, Firecracker //
Marc Rhodes speaks to Rachel Linstead, owner of Firecracker, all about the importance of food and nutrition, and it’s impact on health, wellbeing and culture in the workplace. Rachel also discusses how she fell in love with Lincoln and why it’s a great place to live and work.
32:45
October 31, 2019

// Stephen Gillard, The Blue Room //
Marc Rhodes speaks to Stephen Gillard, Artistic Director at The Blue Room, The Asylum Players and Cakes & Ale. Stephen talks about the story of The Blue Room, upcoming show ‘The Crucible’, involving the community in the arts and why he loves Lincoln. Marc also updates on the launch of his new mens’ mental health project ‘Man Cave Monday. OurLincoln is sponsored by CityX, MR7 Marketing, Visit Lincoln, Stokes Tea & Coffee, Akedo Gaming Bar and is recorded in The Tank Room at the White Hart Hotel.
46:01
October 3, 2019

// Darren Beckett, Taylor Walsh Property Consultants //
Marc Rhodes speaks to Darren Beckett about how he set up his own property business, innovations in property marketing and why he loves Lincoln.
53:31
September 18, 2019

// Pete Watson, Distract //
Host Marc Rhodes speaks to Managing Director of Distract, Pete Watson in an hour long feature length episode. Pete talks about his career journey, his advice to young business people, life as an entrepreneur, how he switches off and why he loves living and working in Lincoln. Thanks to our sponsors; CityX, Visit Lincoln, White Hart Hotel, Stokes Tea & Coffee, Akedo Gaming Bar & Positive Connections.
1:01:12
August 14, 2019

// Chris Vaughan Photography //
Host Marc Rhodes speaks to Lincoln based commercial and sports photographer, Chris Vaughan about his journey from photographing Cwmbran Town to setting up his own business in Lincoln, to shooting the Champions League Final.
33:33
August 8, 2019

// Alice Carter - Lincoln City Foundation //
OurLincoln host Marc Rhodes speaks to Alice Carter from the Lincoln City Foundation about her career journey, her work for the football club around the Sincil Bank area and her voluntary work for Action LN2.  Alice talks about her passion for her local community and her love of marathon running, as well as all the things she loves about Lincoln. This episode is sponsored by Stokes Tea & Coffee, The White Hart Hotel, CityX, Visit Lincoln, Positive Connections and Akedo Gaming Bar.
41:10
July 17, 2019